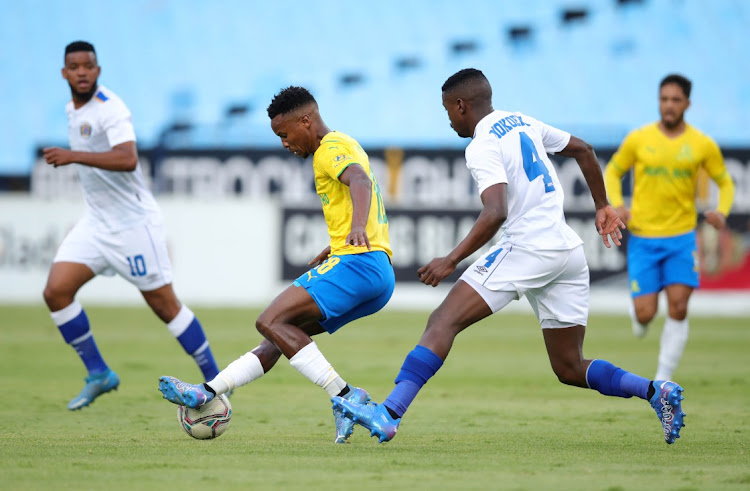 SuperSport United became the first team to unlock Mamelodi Sundowns' defence this season as they held them to a 2-2 draw in the Tshwane derby at Loftus Versfeld yesterday.

Gamphani Lungu and Teboho Mokoena scored the goals after Neo Maema and Peter Shalulile had given Sundowns a two-goal cushion.

Lungu first capitalised on Denis Onyango's error after the Ugandan failed to hold on to Jamie Webber's shot to slot home before Mokoena found the equaliser from a set-piece.

The draw meant Sundowns have dropped points in two matches in a row after playing to a goalless draw with Cape Town City on Saturday.

SuperSport were desperate to end their neighbours' impressive run of having not conceded a goal since May.

The in-form Thamsanqa Gabuza came close to breaking the deadlock when he gave Sundowns an early scare after he hit the frame of the goal in the opening minute.

But that seemed to have woken the Brazilians as they took full control thereafter, with Pavol Safaranko and Peter Shalulile starting to give the SuperSport defence something to think about.

Shalulile came close to breaking the deadlock on 28 minutes, with the Namibian striker unleashing a powerful strike that crashed against Ronwen Williams's crossbar.

Despite being put under pressure, it was SuperSport who had the better of the chances in the first half with Gabuza coming close twice.

But, as has been the case this season, Sundowns displayed the patience that has been a virtue this season as they waited for their chance to come.

Maema found the back of the net with a beauty from outside the box that left Williams helpless.

Sundowns doubled their lead immediately after the restart. The Brazilians won the ball in the SuperSport half and Maema set up Shalulile to beat Williams, who should have done better.

After conceding those two goals, SuperSport moved more bodies forward and started asking questions of the champions. Lungu pulled one back in the 70th minute before Mokoena equalised from a set-piece 10 minutes later.

SuperSport finished stronger and had chances to win the match, but had to settle for a draw in the end.

If Orlando Pirates’ inconsistency is anything to go by, May 2022 will mark exactly 10 barren years since they last won the Premiership title.
Sport
1 week ago

Swallows have denied speaking to coach Gavin Hunt as a possible replacement for under-fire Brandon Truter at the club.
Sport
1 week ago

Mamelodi Sundowns' impressive defensive record will be put to the test when they take on SuperSport United in the Tshwane derby at Loftus on ...
Sport
1 week ago
Next Article