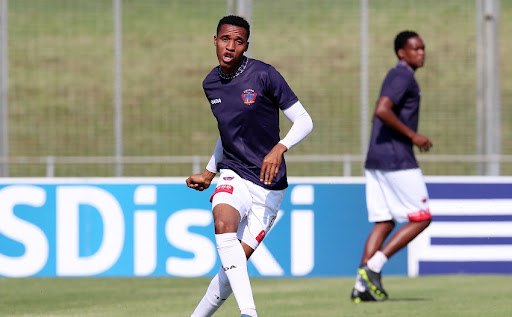 Sammy Seabi of Chippa United during the DStv Premiership match between Royal AM and Chippa United at Chatsworth Stadium on September 12, 2021 in Durban, South Africa.
Image: Muzi Ntombela/BackpagePix/Gallo Images

Chippa United midfielder Sammy Seabi says his side will not settle for a draw as they want to grab all three points against Orlando Pirates in their DStv Premiership match at the Nelson Mandela Bay Stadium on Saturday.

The Eastern Cape outfit want to bounce back to winning ways after their 1-0 defeat to Royal AM in Durban last weekend.

“I won't really say much about that game [Royal AM] but I believe it's something we have to learn from,” Seabi said.

“I believe that we now know where we got it wrong and we will correct that. We are now preparing for the Pirates game on Saturday and I believe we are ready. We have fixed where we thought maybe we had some issues.”

Seabi is confident his side will put up a good fight against the Buccaneers after their disappointing defeat to Royal.

“It is important to get three points, it will boost our morale, our confidence,” he said.

“Because we just came out from a loss, we need to redeem ourselves and get back to winning ways.”

The 26-year-old revealed that coach Gavin Hunt has told Chippa to be wary of their opponents, as Bucs possess plenty of quality in their ranks.

“The coach has been telling us a lot of things, and to be tactically aware,” he said.

“We are playing a very good side in Orlando Pirates. So, we are expecting a lot from our players, including myself.

“We just need to man up and take responsibility, we have done it before, we can manage.”