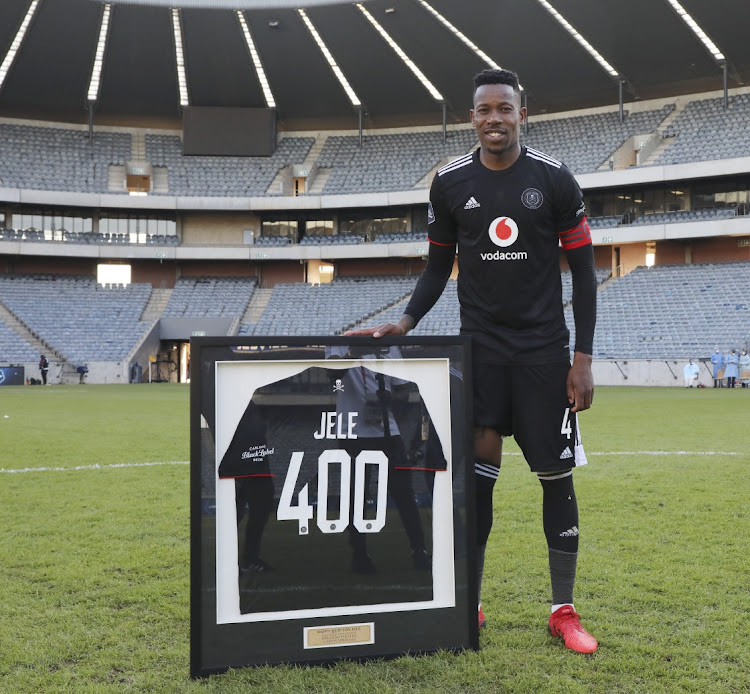 You would think that Happy Jele’s 400th milestone games will be the ultimate achievement for him, but former Orlando Pirates player Joseph Makhanya and coach Milutin Sredojevic believe otherwise.

Jele reached the milestone on Saturday when Pirates beat Swallows 1-0 to become the first player in the history of the club to make 400 appearances.

Makhanya and Sredojevic believe the captain can still reach 500 before he can hang up his boots. Jele’s longevity also saw him extending his record, surging further away from legendary goalkeeper William Okpara (375) after making his debut in 2006.

“The first time I met him, he was a very humble player and he never changed even today,” Makhanya told Sowetan yesterday.

“Very disciplined, he never wants to show off. I'm talking about on and off the field, he is dedicated. I got to see him while he was coming and saw him grow at Pirates. I played with him for four or five seasons and I know what type of human being he is. I’m still close to him even now and he is a true gentleman and a professional player.”

Makhanya added the reason he believes Jele, 34, can reach 500 appearances. “He is doing very well. That's what I like about him. He works very hard at training and I don’t see anything stopping him from making more than 500 appearances in the future,” he said.

Sredojovic was pleased with what Jele had achieved after he gave him his debut on September 20 2006, against Maritzburg United, while he was still coach at Pirates.

“How time flies; back in 2006 [I] gave the first chance to that boy Jele, now 15 years after, he became a man completing 400 matches at Pirates jersey,” Sredojovic wrote in his Twitter account.

“Already legend, but I trust and believe that with his maturity, magic number 500 is not very far.”

Meanwhile, Jele said he would remain humble and dedicated to achieving more success with the club.

“It’s an honour for me to play for Pirates, a big club in the country as well as in the continent. To have been a part of the club for 15 years is a big personal achievement, and I want to keep going and pushing,” Jele said on the club's official website.

“Just being humble and dedicated, and also respecting the badge, the people around you and respecting the fans. Also, working hard at training and on the field of play, as well as doing a bit extra."

Most appearances at Pirates

Victory continues to be elusive for AmaZulu in the 2021-22 DStv Premiership after they played to a second successive 0-0 draw at home, this time to ...
Sport
4 months ago

Chippa United coach Gavin Hunt admits his side slipped to a disappointing defeat by Royal AM, despite having plenty of chances to steal a point.
Sport
4 months ago

AmaZulu reserve league side started the defence of their DStv Diski Challenge Rewired competition with a 1-1 draw with Golden Arrows at King ...
Sport
4 months ago

Talent Chawapiwa has shared the close bond which Sekhukhune players have with head coach McDonald Makhubedu and believes it will help them in their ...
Sport
4 months ago
Next Article