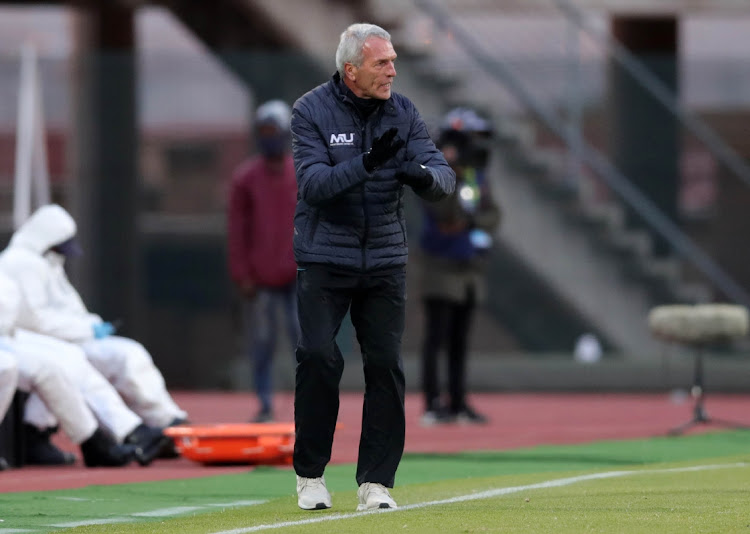 Maritzburg United coach Ernst Middendorp believes it is premature to start talking about what needs to be done to turn the club around despite sitting at the bottom of the DStv Premiership log.

The Team-of-Choice are without a point after losing their first two games of the league season.

Middendorp insists his focus at the moment is on building a team to compete later in the season after losing a few key players during the transfer window and that he is not worried about their position just yet.

“Whether we’ve zero points, one or two, what we are doing is building a new team and I’m sitting here having to talk about turning it around,” Middendorp told the media. “It is a lovely situation we are in. There is space for improvement...

“I’m looking at results, yes but I’m looking at performances too. I’ve seen a lot of soccer games this season and when I look at the first half in particular against Golden Arrows, where we lost, in my opinion, [based on] what I have seen in the league so far, [it] is the best 45 minutes from all the games teams provided.”

The German mentor is confident that by the time they have played seven or eight games they won't be bottom of the table. “We know our individual qualities. We know it is not really cohesive [as] it could be or should be but we know the reasons for it and we will be fine in the next matches,” he said.

“Give us several games, seven or eight, and see where we are sitting – what could we do that could turn [things] around – but not after two games.”

Maritzburg will be searching for their first points of this season when they travel to Polokwane to face Baroka at Peter Mokaba Stadium tomorrow at 5pm. “We need to show respect home and away and know exactly what’s coming and what needs to be done."

While Ethan Brooks is establishing himself as one of the upcoming and promising players, he has vowed to remain humble and not get carried away by ...
Sport
8 months ago