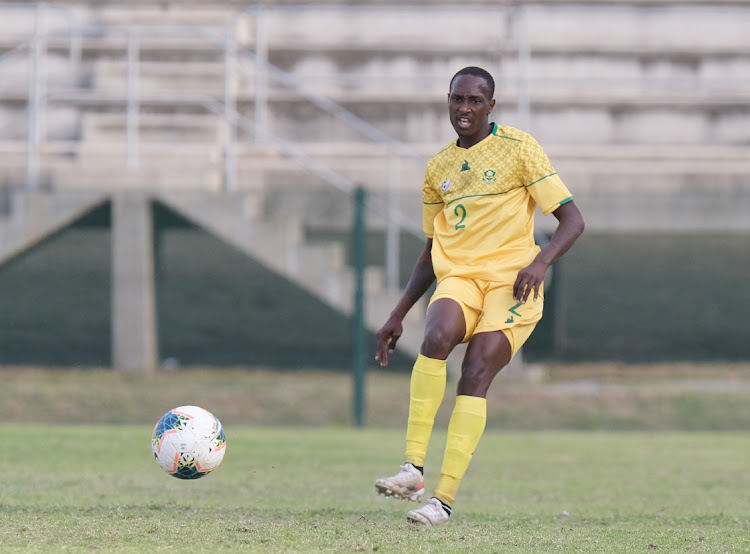 Nyiko Mobbie was one of the emerging stars for Bafana Bafana in their recent World Cup qualifiers but that was still not enough for his club Sundowns, who've again sent him on loan.
Image: Michael Sheehan

After being loaned out to Stellenbosch in his first season at Sundowns from Free State Stars, the defender spent the previous campaign at Chippa United.

Yesterday, Sekhukhune United confirmed that the 26-year-old will spend this season on loan with them from Sundowns.

Ba Bina Noko also clarified why they only announced him yesterday, a week after the transfer window shut.

“He signed with us before the window closed and the reason we could not unveil him was that he was away with the national team,” a club official said to Sowetan yesterday.

“We didn’t sign him yesterday. It happened long ago.”

Mobbie played for Bafana during the Fifa Qatar World Cup qualifiers against Zimbabwe and Ghana where he helped the national team register four points in both matches.

Babina Noko also confirmed the arrival of Seth Parusnath, who was a free agent from Golden Arrows. Parusnath was training on his own after a failed move to SuperSport United and Kaizer Chiefs.

He left Arrows to join SuperSport but the move did not materialise. But now Parusnath can have more relaxed nerves as he looks forward to making his mark with Sekhukhune.

“I’m very excited. It is a new challenge for me. I’ve been a Durban boy all my life, so I’m looking forward to being here and helping the team as much as possible,” he told the club's media department.

“It is exciting that everybody has welcomed me. We have an experienced group of players. There are few familiar faces that I have been playing with before, so it was also good to see the players that I knew.

“I will try to give everything on the field and work very hard.”

Sekhukhune have made good signs in the likes of Willard Katsande, Thabo Rakhale, Edwin Gyimah and Talent Chawapiwa among others.

They will be looking for their second victory this season when they host Stellenbosch at Ellis Park Stadium on Saturday at 5pm.

How Cheeseboy rebuilt his career after almost quitting

Veteran midfielder Lebohang Mokoena has credited maturity for his resurrection at Swallows.
Sport
11 months ago

Having played as a winger in all Mamelodi Sundowns’ four matches across all competitions this season, utility left-back Aubrey Modiba is confident ...
Sport
11 months ago

AmaZulu coach Benni McCarthy had to rely on his defender Limbikani Mzava for information on Nyasa Big Bullets from Malawi, their opponents in the CAF ...
Sport
11 months ago
Next Article