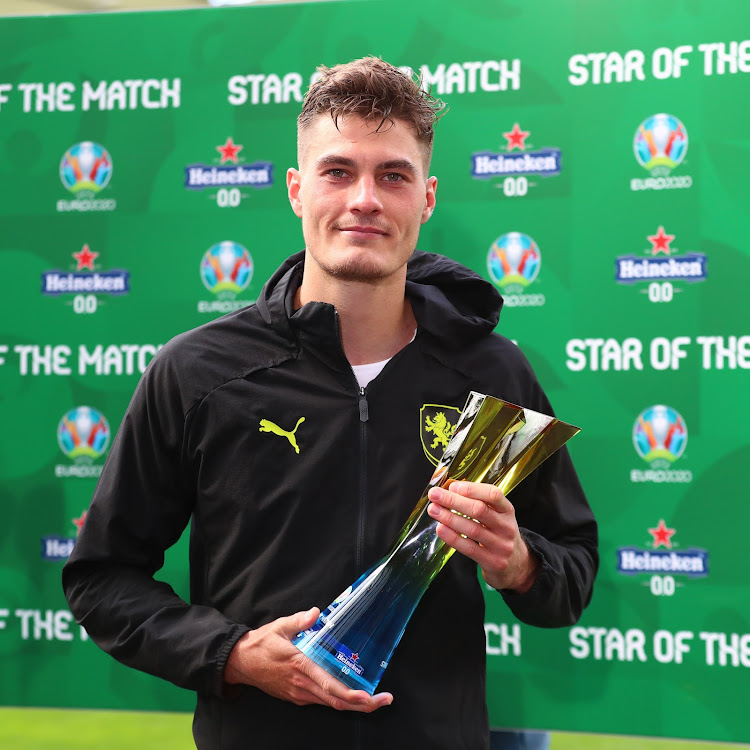 Patrik Schick scored one of the most remarkable goals in European Championship history as the Czech Republic beat Scotland 2-0 on Monday to get their Euro 2020 campaign off to a flying start and deflate home hopes in Glasgow.

Schick, who had also netted an excellent header in the first half, doubled his tally after the break with a curling, looping effort from just inside the Scotland half, having spotted home keeper David Marshall far off his line.

At 49.7 yards, the Bayer Leverkusen forward's astonishing effort was officially the furthest recorded distance from which a goal has been scored at the European Championship.

"That second goal, that is a cherry (on the cake)," Schick said, before adding that he had clocked Marshall coming off his line earlier in the game.

"I watched the goalie already, where does he stand, he was quite up the pitch, so I checked, I saw him outside and I smashed it."

Scotland had battled gamely on their return to tournament football after a 23-year absence and spurned a number of excellent chances of their own, with Lyndon Dykes guilty of wasting two superb opportunities.

"It’s a tough lesson for us that at the highest level, at the best tournaments, you have to take your chances," said Scotland captain Andy Robertson.

"Czech Republic did that, we didn’t."

The Czechs were worthy winners, soaking up Scottish pressure in the first half, and quieting a noisy Hampden Park crowd, who were seeing their side play in a major tournament for the first time since the 1998 Fifa World Cup.

The result left the Czechs on three points, level at the top of Group D with England, who beat Croatia 1-0 on Sunday, while Scotland will already be feeling nervous about their prospects ahead of their next game against England on Friday when the Czechs face Croatia.

Scotland began the game at full throttle, fuelled by a vociferous home crowd who seemed to defy the fact that there were less than 10,000 of them in the stadium.

Yet the Czechs weathered the early pressure and grew into the game, taking the sting out of Scotland's attacks before moving further up the pitch.

Schick had a snap shot palmed away by Marshall after 15 minutes but he made his mark decisively just before halftime.

The Czechs, who scored more than half of their goals in qualifying from set pieces, earned a string of corners just before the break and finally took advantage in the 42nd minute.

Scotland cleared the initial ball into the box but Vladimir Coufal curled a cross back into the danger area and Schick rose brilliantly to beat his marker and angle a header into the far corner away from Marshall's despairing dive.

The second half began with a flurry of activity and the Czechs could have extended their lead with first Schick and then Vladimir Darida drawing fine saves from Marshall, with Scotland almost levelling at the other end when Jack Hendry hit the bar.

Yet Schick's astonishing finish in the 52nd minute crushed hopes of a Scottish revival.

There appeared to be little danger when the forward latched onto the ball just inside the Scotland half, but his instant finish curled past Marshall, who was scampering to get back into his goal, and dipped just beneath the bar.

Scotland were not dead and buried at this stage but after Czech keeper Tomas Vaclik saved twice from Dykes, their hopes of getting back into the match seemed to have evaporated.

Questions may be asked about Marshall's positioning for Schick's goal but Scotland boss Steve Clarke was not going to point the finger at his keeper.

"I think rather than looking to apportion blame all the time, sometimes you have got to credit the goal scorer," he said.