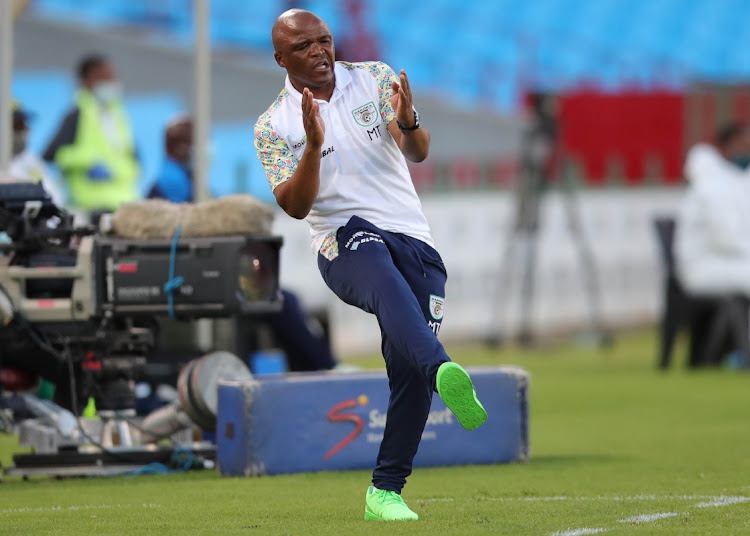 This is according to Bakgaga coach Matsimela Thoka. In the 2019/20 season, then 20-year-old midfield anchor Goodman Mosele started 21 league games before being voted the young player of the season in the end.

In the just concluded term, striker Evidence Makgopa, 21, inherited the gong from his teammate after  starting 28 league games and racking up seven goals.

For his splendid campaign, “Tower”, as Makgopa is nicknamed, was rewarded with a maiden Bafana Bafana call-up for last Thursday’s friendly against Uganda, where he came off the bench to net a brace that handed SA a 2-1 win at Orlando Stadium.

Thoka, who previously worked with both Mosele and Makgopa in the club’s development ranks before reuniting with them in the senior side, feels the duo’s achievements are the fruits of Bakgaga’s belief in youngsters.

“Our boys Mosele and Makgopa have a bright future in football. As a team, we are very proud of them. The awards these boys have won are the ultimate recognition the club gets for believing in young blood,’’ Thoka told Sowetan.

“This is the nature of Baroka, we believe in youngsters. Actually, we look at potential rather than to say ‘no, this one is for future’. We don’t do that, we believe that the future is now.’’

He is also grateful for the backing of club chair Khurishi Mphahlele in this regard.

“I know other coaches are scared to take that risk of trusting youngsters because they’re afraid that young players might be overwhelmed by the big stage and underperform, which could result in a job loss for coaches,’’ said Thoka.

“However, here at Baroka we have full support of the chairman. He believes in younger players, so it’s easy for us as coaches to throw them in the starting XI.”

The Limpopo side aims to promote at least three other development graduates next season. Thoka was reluctant to divulge the names of the players.

“We will promote two or three youngsters from our development team. At this stage we can’t give out their names because that could make them think they’ve already arrived, whereas they still have to show if they’re ready for [the] top flight or not.’’

With Royal AM confirming they are heading to the Supreme Court of Appeal (SCA), the Premier Soccer League (PSL) playoffs are unlikely to start ...
Sport
7 months ago

Polokwane City’s application to the Johannesburg high court to have an arbitration overturned in the Glad Africa Championship has been dismissed.
Sport
7 months ago
Next Article