U-23 coach reckons Tau will be key to squad 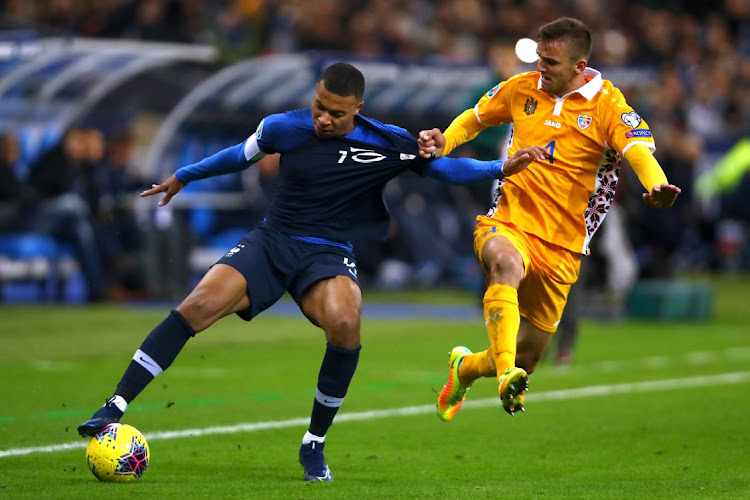 Kylian Mbappé of France, left, is challenged by Sergiu Platica of Moldova during a match in Paris. The French superstar’s inclusion in the country’s Olympic team may be hindered by the late finish of the Uefa Euro Championships
Image: Dean Mouhtaropoulos/Getty Images

SA Under-23 trainer David Notoane has reacted with a glee to being drawn against hosts Japan, Mexico and France in the upcoming Olympics Games’ Group A.

The draw for the Games, to be hosted in Tokyo, Japan, from July 23 to August 8, was conducted in Zurich yesterday.

SA will be making their third appearance at the Olympics, having participated in 2000, hosted by Australia’s Sydney, before also making it to Rio, Brazil, in 2016.

In both previous attempts, SA failed to progress to the knockout phase. After learning their opponents, Notoane feels SA stand a good chance to make it to the quarterfinals this time around.

“It’s a good draw but a tough draw, that’s my first reaction. I don’t think one could have asked for better draw than this. Of course, you can look at Group B [where Korean Republic are pitted against Romania, New Zealand and Honduras] and say, ‘I wish I was there’, but the reality is that our prayers were answered that we get a workable draw,’’ Notoane told Sowetan.

“I think we can make history and come out of the group stages to qualify for the first time. Now that we know our opponents we must base our preparations on their style of play. All in all it’s a draw I feel we can qualify playing against these teams. I am excited and looking forward to the Games.’’

With this year’s Uefa Euro Championships concluding nearly two weeks before the start of the Olympics, France are unlikely to include their Paris Saint-Germain superstar Kylian Mbappé in their squad. Still, Notoane doesn’t want to read too much into the prospect of facing an Mbappé-less France, quipping if they bring him SA also have a star in Percy Tau.

“If France come with Mbappé we mustn’t worry because we have Percy as well. We will have to wait and see if Mbappé makes the team or not. But we all know that France boast so many talented players, so the presence or absence of him shouldn’t be a big deal for them,’’ said Notoane.

South Africa Under-23 coach David Notoane named a provisional squad of 40 players for the Tokyo Olympics on Thursday that included overage Bafana ...
Sport
1 year ago
Next Article