We must manage games better, he tells his players 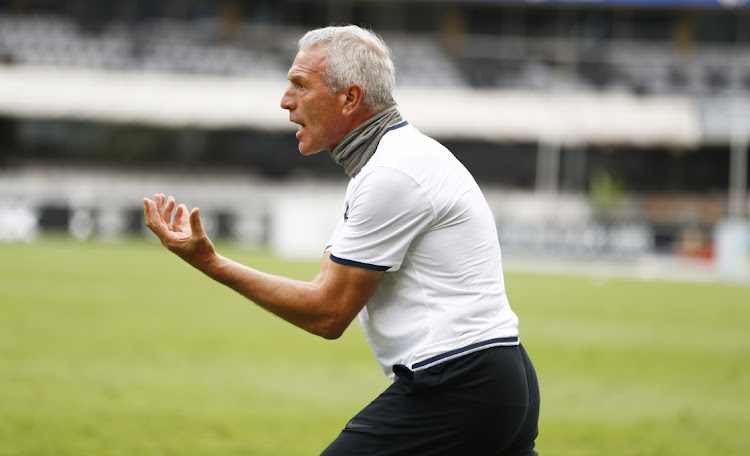 Maritzburg United coach Ernst Middendorp has urged his players to learn how to manage their game.

The KZN side let slip a 1-0 lead to lose 1-2 against Golden Arrows in the KwaZulu-Natal derby at Sugar Ray Xulu Stadium on Saturday.

Thabiso Kutumela had given the Team of Choice a lead 10 minutes before the interval, but Arrows responded with goals from Lindokuhle Mtshali and Knox Mutizwa to secure all three points.

The defeat was Maritzburg's third in succession, while Arrows returned to winning ways after they saw their unbeaten run ended by Cape Town City in their last match.

“It is something I said before that we can play 70% of the intensity of a game. We’ve seen the excellent first half, totally dominant, and in the end, we were not able to go through to the 90 minutes,” Middendorp told the club media department.

“That’s our problem at the moment. But look, every day, week by week, we work on it, and we will make it happen that we can manage the game when we are leading.

“The majority of the game was good. We showed what we can do, and now we have to work on it to do better and win the games as soon as possible.”

Arrows coach Mandla Ncikazi was full of praise for his players following the win but was not entirely satisfied with their first-half performance.

“I thought we struggled to play our normal game in the first half. We are a team that builds from the back, a variation that gives us the start whether you go to the wing-backs or direct,” Ncikazi told the Arrows media department.

“But I thought every moment when we had the ball we were giving it away. It never worked, we conceded the goals, and I thought the signs were there.

“I told the players at half time that we are going to come back if we play the way we play.

“We created chances, and we scored. I think we deserved to win, and I think we should have scored even more goals, but I’m just proud of these boys.”

Champions Mamelodi Sundowns extended their lead at the top of the standings after they beat Chippa United 2-0 at Loftus on Sunday afternoon.
Sport
11 months ago

Swallows FC are simply too resilient to lose a match in the DStv Premiership‚ drawing 1-1 against another top contender‚ SuperSport United‚ on ...
Sport
11 months ago
Next Article