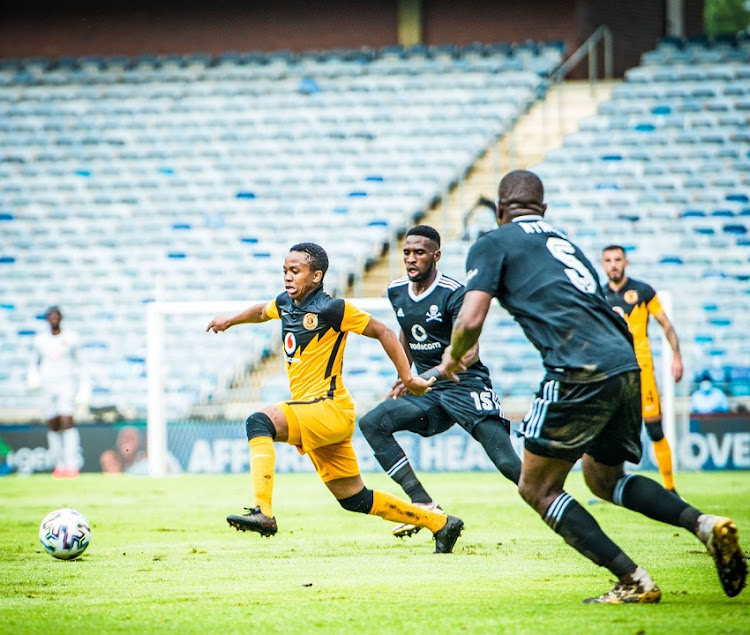 SowetanLIVE has rated the performances players from both sides:
Image: TWITTER/KAIZER CHIEFS

Orlando Pirates returned to winnings ways with a 2-1 DStv Premiership win over Kaizer Chiefs in the exciting Soweto derby that was played at the Orlando Stadium in Soweto on Saturday afternoon.

SowetanLIVE has rated the performances players from both sides:

Richard Ofori 7 – On top of saving a penalty from Samir Nurković‚ the Ghanaian stopper was splendid throughout the mach.

Thulani Hlatshwayo 6.5 – He was involved in an interesting battle with Nurković and he did well to neutralise the Chiefs hit-man.

Happy Jele 6.5 – Led with a sense of assuredness in central defence and read the game very well.

Ntsikelelo Nyauza 6 – Pulled off a stunning goal-saving clearance on the line in the first half to deny Nurković and he was solid all afternoon.

Bongani Sam 5.5 – Found himself in good positions on the attack but most of his crosses lacked the required quality.

Thabang Monare 7 – Had a storming game as he continues to establish himself as a vital cog in the heart of the Pirates midfield.

Ben Motshwari 6.5 – His tackle inside the box led to Chiefs’ penalty but goalkeeper Ofori saved his blushes by denying Nurković.

Fortune Makaringe 6.5 – He continues to impress for Pirates and he dished up another assured performance.

Vincent Pule 6.5 – He was a livewire on the attack for Pirates and kept Chiefs’ defenders on their toes the whole afternoon.

Deon Hotto 4.5 – Not at his usual best and was rightfully replaced in the second half.

Thembinkosi Lorch 7.5 – Scored the opening goal just before the half-time break and he was deservedly named the man-of-the-match for his all-round performance.

Daniel Akpeyi 5.5 – He came off his line but failed to deal with the advancing ball that led to Lorch’s opening goal.

Siyabonga Ngezana 5 – He was lucky to stay on the pitch after crunching tackle on Vincent Pule in the first half and he missed a sitter in the second half.

Philani Zulu 5 – He was kept mostly in his own half for large parts of the game and that limited his ability to deliver crosses.

Reeve Frosler 4.5 – He allowed Paseka Mako space in the box to lay the ball to Siphesihle Ndlovu who scored Pirates’ second goal in the closing stages.

Daniel Cardoso 5 – Pulled one back for Chiefs in the closing stages but the damage was already done.

Njabulo Blom 5 – He struggled to stamp his authority on the match against far more experienced opposition players‚ especially Monare and Motshwari.

Kearyn Baccus 6.5– He was one of the stand-out performers for Chiefs as he returned with an assured performance in the hotly-contested midfield.

Lebogang Manyama 6 – He was on the forefront of some of Chiefs’ dangerous attacks and generally he put together a solid shift.

Nkosingiphile Ngcobo 4 – A lot was expected from him but he didn’t live up to expectations and he rightly did not come back from the half-time break.

Samir Nurković 6 – His poorly-taken penalty was saved by Ofori who dived to the right and he continues to wait for his first Soweto derby goal.