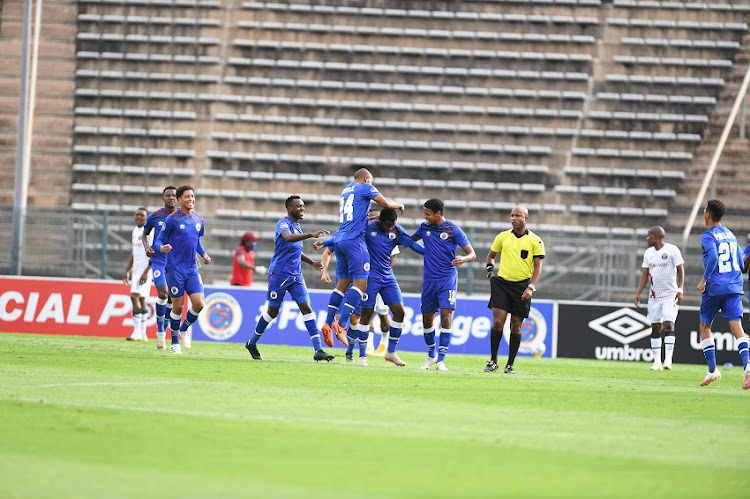 Swallows FC are simply too resilient to lose a match in the DStv Premiership‚ drawing 1-1 against another top contender‚ SuperSport United‚ on Saturday evening.

Brandon Truter’s team defied the odds for the umpteenth time at Lucas Moripe Stadium‚ on this occasion substitute striker Mhlongo’s strike earning the high-flying Dube Birds a deserved share of the points.

Mhlongo’s goal not only keeps Swallows’ unbeaten run intact after 14 rounds in the Premiership but Truter’s team also remain third and level on 28 points with second-placed SuperSport on the log‚ in third place just by virtue of goal difference.

Lucky Mohomi's early goal looked enough to end Swallows’ remarkable run since their promotion to the DStv Premiership – the central midfielder’s long range strike was set to take SuperSport on top of the log and level on points with defending champion leaders Mamelodi Sundowns.

Mohomi‚ who joined SuperSport at the beginning of the current season after three sorry years at Sundowns‚ gave SuperSport the lead after he was given plenty of room to drill in his low shot that was deflected in by Swallows right-back Vuyo Mere.

Mhlongo’s equaliser keeps Swallows on course to achieving their aim of collecting 45 points and maintaining their place in the Premiership. The Dube Birds’ promotion from the GladAfrica Championship last season ended their five-year absence from top-flight football.

Kaitano Tembo’s United had produced another workmanlike performance before they were dealt a severe blow by Mhlongo who ghosted in from the far post‚ tapping in Kamohelo Mahlatsi’s cross on the right to score his third goal of the season.

For the first time this season Truter had to make do without his top marksman‚ Ruzaigh Gamildien‚ who collected his fourth booking in another last-gasp draw at this venue against Sundowns last week.

Truter had Kagiso Malinga supported by Fawaaza Basadien and Zephaniah Mbokoma but didn’t look as sharp and clinical as they usually are when they field Gamildien‚ who had scored nine league goals in Swallows' first 13 matches before earning his suspension last week.

Swallows pressed for the equaliser before the end of the first 45 minutes with their skipper‚ Lebohang Mokoena‚ coming close on two occasions to ruining Ronwen Wiliams’s celebration of 100 consecutive domestic starts in SuperSport’s goals.

But Mhlongo did just that‚ scoring yet another goal for Swallows after coming on.

Having managed to avoid defeat against Sundowns (1-1)‚ Orlando Pirates (1-1) and Kaizer Chiefs (2-1)‚ Truter will now be confident of adding all the 17 points he needs - to get to 45 - in the remaining 16 games‚ starting at home against AmaZulu on Valentine’s Day.