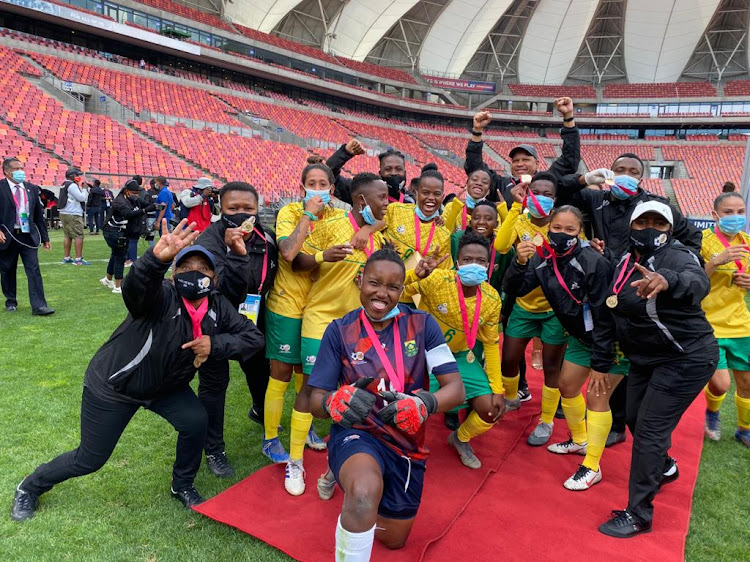 Plans are underway to ensure that Bafana Bafana and Banyana Banyana players are paid the same amount for representing the country on the international stage.

The South African Football Association has confirmed that its National Executive Committee (NEC) is speeding up the process after the Economic Freedom Fighters (EFF) made fresh calls for equal pay this week.

Banyana‚ who are paid significantly less in match fees and bonuses compared to their Bafana counterparts‚ won their fourth successive Cosafa Women’s Championship title in Port Elizabeth at the weekend‚ prompting the EFF to call for equal pay.

Reacting to the EFF’s call that has received public support‚ Safa spokesperson Dominic Chimhavi said equal pay for the senior men and women's teams is ‘a work in progress.’

“This is an issue which we are mindful of and the Safa NEC has always said that they are looking into the possibilities of making sure that whatever is done for the senior male national teams‚ should also be applied to the senior female national team‚” said Chimhavi.

“It is something that is a work in progress‚ but also at the moment is determined by what is put in the coffers for the two respective teams.

"It is an issue that needs collectivity in the sense that the corporate world continues to pour in money into the men’s game and not the women’s game. That needs to change but as Safa we have always maintained that there is huge potential for growth of the women’s game.”

Chimhavi also assured that Banyana players will be paid for playing in the tournament in Port Elizabeth.

“Banyana players are always paid‚ there is always a fee they get from taking part in the tournaments and it is the same with this Cosafa.

"They will get their fees. For every other national team‚ we have standing arrangements and those arrangements are effected after every tournament.”

In their letter‚ the EFF referred to Banyana as a national assert and source of courage in the midst of despair and despondency.

“EFF sends its congratulations to Banyana Banyana‚ South Africa’s senior women football team on their triumph at the COSAFA Women’s Football Cup. Their victory marks the fourth consecutive clinching of the title‚ extending an incredible streak in the tournament.

“This victory should signal the need to expedite equal pay and sponsorship of all national teams regardless of gender. Banyana Banyana has long proven itself to be a national asset and a source of courage in the midst of despair and despondency‚ as a result of worst economic downturn‚ the Covid-19 pandemic and most importantly‚ the rampant racism being visited upon black Africans.

“We call on the male senior team‚ Bafana Bafana to emulate the women team and make South Africa great again like they did in 1996 Caf continental competition. The EFF calls on the Minister of Sports‚ Arts and Culture to ensure that the team is paid more money than Bafana Bafana who haven’t won anything for over 15 years.”