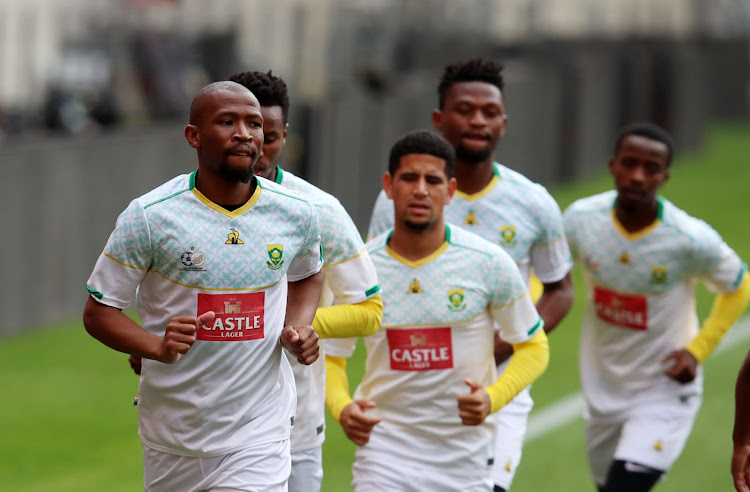 Bafana Bafana will look for back to back win against Sao Tome and Principe.
Image: Bafana Bafana/Twitter

Bafana Bafana showed a glimpse of the vision that Molefi Ntseki has for the team in the second half of Friday's 2-0 win against Sao Tome and Principe‚ and the coach wants more of the same against the same opponents on Monday.

Bafana have a chance to complete the mission and take advantage of the situation presented by Sao Tome ceding home advantage in their second Africa Cup of Nations qualifier against SA to limit travel in the interests of safety in a Covid-19 pandemic.

Should the South Africans earn a second three points at Nelson Mandela Bay Stadium on Monday (kickoff 3pm)‚ they will have a foot in the next Nations Cup in Cameroon in January and February 2022.

Even with such a situation‚ most of the sceptics of Ntseki will remain. The coach's stop-start tenure has not done him any favours‚ with just six matches in a year to attempt to implement his philosophy.

Ntseki‚ as much as rusty Bafana were far from convincing at Moses Mabhida Stadium on Friday‚ especially in the first half‚ they showed glimpses of the skills-based possession game‚ aimed at entries into the opposition area‚ he wants to instill.

"I think it is important for us at times to understand the qualities of South African players‚" the coach said.

"I keep on saying they are different from any other country‚ even when it's Lesotho or Botswana‚ or Zimbabwe close to us.

"We have got the skill‚ the flair and the creativity. And if ever you profile our players properly you need to play that game that suits the players who we have.

"And when it comes to the first half‚ I think possession and playing vertically in our attack did not work very well for us.

"And that's why‚ based on the team‚ we did not change anything in the second half except for positioning and different roles and functions to be carried out.

And I think with the qualities of the players that we have in the country‚ possession‚ penetration and combinations really worked out for us [in the second half].

"Because the top four of Percy Tau‚ Lebo Manyama‚ Keagan Dolly and Themba Zwane started enjoying the game more in the second half. And because of the creativity that they have‚ which is very natural with our players‚ everything started working very well.

"And I think going to the next match we'll always build on what we were good at‚ and make sure that we play to win matches.

"I think every South African is aware that six points will be very important to us. We play to win on Monday. And winning on Monday will give us a very good opportunity to qualify for Afcon."

Ntseki seems likely to maintain the core of the team who ended strong on Friday night‚ with perhaps Bongani Zungu - forceful coming off the bench and scoring‚ and seemingly now friends again with the national coach - having earned a start in Port Elizabeth.

Ghana's 2-0 win at home to Sudan keeps them top of Group C with nine points‚ with Bafana second on six‚ Sudan third on three‚ and Sao Tome last on zero.