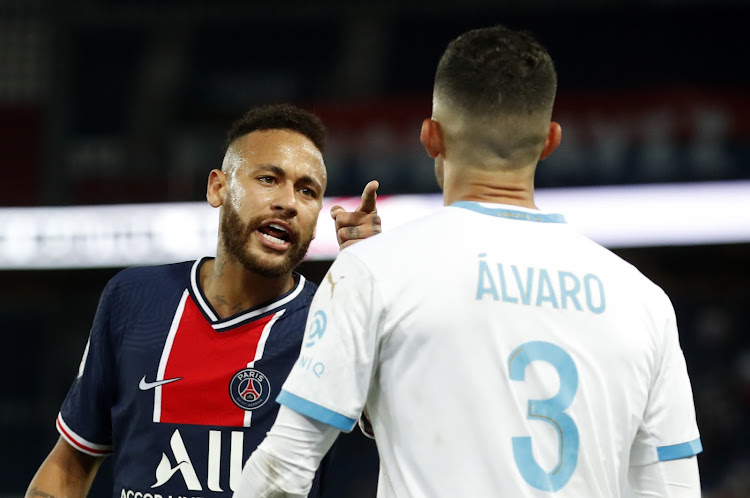 Neymar clashes with Olympique de Marseille's Alvaro Gonzalez. Neymar struck Gonzalez on the back of the head and the Brazil star tweeted after the match that his only regret was not hitting the Marseille defender in the face.
Image: REUTERS/Gonzalo Fuentes

Paris St Germain (PSG) forward Neymar has said he was the target of a racist slur during the French champions' 1-0 defeat by Olympique Marseille on Sunday, the BBC reported.

The 28-year-old, one of five players sent off during the match at the Parc des Princes, informed the fourth official of the comment while walking off the pitch.

Littered with fouls throughout, the clash boiled over in the last minute of stoppage time when a full scale brawl broke out on the pitch.

PSG's Neymar, Laywin Kurzawa and Leandro Paredes as well as Marseille's Dario Benedetto and Jordan Amavi were sent off after players aimed punches and kicks at each other.

Neymar, who struck Alvaro Gonzalez on the back of the head, tweeted after the match that his only regret was not hitting the Marseille defender in the face.