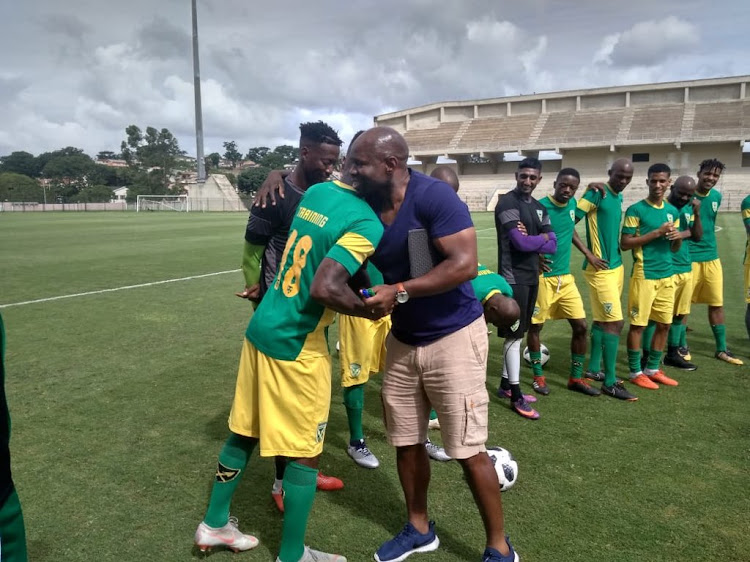 Golden Arrows coach Steve Komphela says he joined social media to use the platform to spark deep conversations and motivate people who are going through difficult times in their lives.

Komphela‚ who is an engaging figure on various topics and also well known as a critical thinker‚ regularly engages the public and posts motivational messages on his Twitter and Instagram accounts where he has a massive following.

“I am trying to inspire with the hope of easing the pain of suffering because I know the smell of poverty‚” he explained.

“I know the taste of cool aid and sweet aid‚ and not Oros‚ which is a luxury. We don’t talk about our tough past and we forget that there are those black people who are in desperate situations where we once found ourselves.

"It is exactly where I was when I was 18 years old‚ so I want to give hope to them so that they take the pain and believe that they can be where I am. All that I am trying to put across is a professional and an inspirational line that is going to help those who are going through what I went through because I am from there."

Komphela said his interactions are his small way of helping with nation building.

“My take on these platforms is around the very essence that we don’t interact a lot with people who are not close to us. When you have platforms like Twitter‚ Instagram and others‚ they must be used at a social vehicle or drive to achieve a particular goal.

“Recently Donald Trump just said ‘you loot we shoot’ during the Black Lives Matter marches and Twitter decided to put a ban on that. Now there is a fight between Twitter and him (Trump). He is abusing the platform for lack of intelligence as we all know that.

"I want to inculcate a particular way of thinking or culture to say it is okay to be wrong but we need to equip one another to get the wrong right.”

Just like many people‚ Komphela is not immune to social media trolls and sometimes blocks those who insult him and are personal.

“A lot of people will insult me on social media.

"The other day I was insulted by someone from the Economic Freedom Fighters in Limpopo. I just blocked him because I found him to be very limited in his thinking capacity. He was talking nonsense and some people who are insulting I just block them because I don’t want to respond and it will reflect on me.

“It is easy to insult but I want to change that perspective. There is a certain audience that I have captured and I feel this can be a movement where people challenge me to think‚ guide me and show me the way. Sometimes it is outside of the very same conversations that I go back and do more research and get more enlightenment.

"I wish I could be opulent and want to pose pictures on Instagram about this or that. Every human being has a private life‚ a personal life and a secret life.”