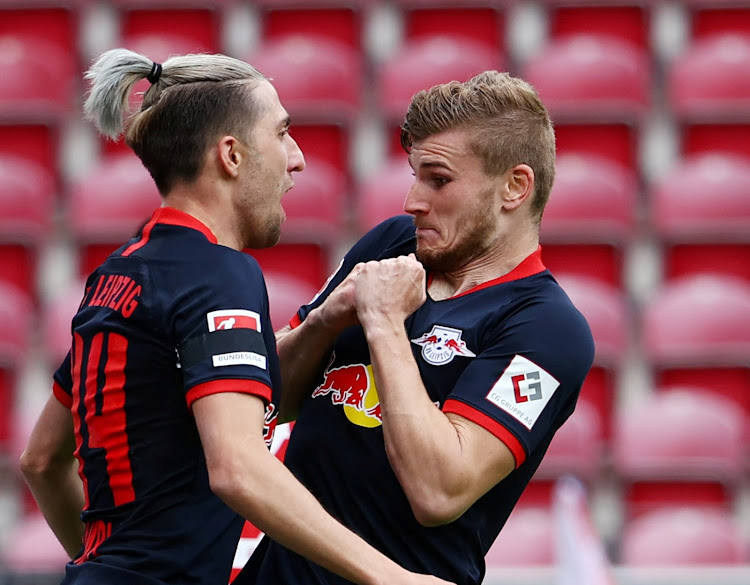 RB Leipzig's Timo Werner tries hard to distance himself from teammate Kevin Kampl when celebrating his goal against Mainz during a Bundesliga match in Mainz on May 24 2020.
Image: REUTERS/Kai Pfaffenbach/Pool

Chelsea have reached an agreement with RB Leipzig to sign striker Timo Werner, who is set to join the English side in July, the Premier League club announced on Thursday.

Werner, 24, will remain at Leipzig until the end of the Bundesliga season and his transfer to the English side is subject to passing a medical.

Financial details of the deal were not disclosed but British media reported Chelsea triggered a 50 million euros ($56.27 million) release clause to secure the Germany international's services.

"I'm delighted to be signing for Chelsea, it's a very proud moment for me to be joining this great club," Werner said in a statement.

"I of course want to thank RB Leipzig, the club and the fans, for four fantastic years. You will forever be in my heart.

"I look forward to next season with my new team mates, my new manager and of course the Chelsea fans. Together we have a very successful future ahead of us."

Werner, who started his senior career at VfB Stuttgart, moved to Leipzig in 2016 and has since scored 93 goals and grabbed 40 assists for the team who are currently third in the Bundesliga.

"On the one hand, Timo's move is a great loss," Leipzig CEO Oliver Mintzlaff said.

"On the other, we view this transfer as a huge compliment of the work of our still young club and we're very proud to have helped create an internationally renowned striker in just a few years."

Werner will be Chelsea's second recruit in the close season after they agreed a deal in February to sign Moroccan winger Hakim Ziyech from Ajax Amsterdam for an initial fee of 40 million euros.

Chelsea are fourth in the standings as the Premier League restarted its season on Wednesday after a 100-day hiatus due to the COVID-19 pandemic. They play their first game on Sunday at Aston Villa.