Aaron Mokoena on the questions he was asked on the eve of the 2010 World Cup: 'Do we live with animals?’ 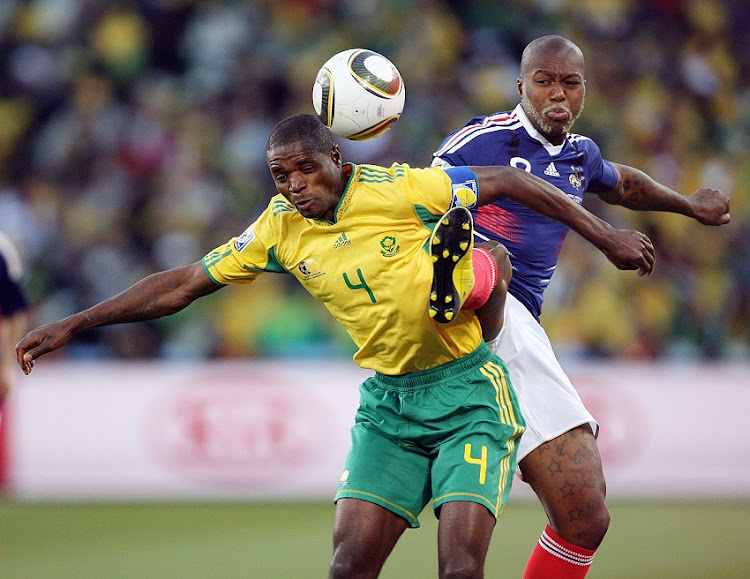 Aaron Mokoena of Bafana Bafana and Djibril Cisse of France in action during the 2010 Fifa World Cup match between Bafana Bafana and France at the Free State Stadium in Bloemfontein, South Africa on 22 June 2010. Even though Bafana Bafana won the match 2-1, they did not make it through to the second round of this tournament.
Image: Gallo Images/Foto24/Denvor de Wee

For Aaron Mokoena‚ the pressure of being a part of the first host African national team of a Fifa World Cup made the weight on his shoulders that margin heavier than on his Bafana Bafana teammates on June 11‚ 2010.

Mokoena told SowetanLIVE that it was in the moments before the opening game against Mexico at Soccer City when his stomach cramped in nerves as the formalities seemed to take an age to be concluded to get the 2010 Fifa World Cup on the road.

For the Bafana captain that moment was a culmination of years of hard work‚ including Bafana’s third-placed finish at the 2009 Confederations Cup curtain raiser to the World Cup‚ the endless friendlies‚ and the months-long training camps in Brazil and Germany.

“I felt the pressure when we were still in the build-up. I think I had over 400 international interviews‚” said the player nicknamed “Mbazo” (hard tackler) in South Africa and “the Axe” at his then-club Blackburn Rovers.

“So I had to educate some people who wanted to come to the World Cup but were not sure.

“Because when I was in the UK‚ on the BBC they would show your Alexandra this‚ and places people would absolutely be sceptical of in terms of coming to South Africa. I had to educate people and market SA.”

Mokoena said that build-up and pressure came to a head when the nerves struck while Bafana were in the Soccer City tunnel‚ waiting to go out in front of a wall of noise and yellow jerseys from the 94‚000 capacity crowd.

“Remember we were locked down in the hotel. All we really did was go to training and come back‚ so we didn’t really have that mood out there until we parade in Sandton [on June 9]. Then I felt‚ ‘This is incredible’‚” the former Bafana skipper said.

“So the morning of the game I had in my head that experience of the 2002 World Cup in Japan and Korea. I had also just played the FA Cup final against Chelsea coming into the camp‚ so I had a bit of an idea.

“But being the hosts‚ and playing in front of your spectators in the World Cup – I never had that.

“In the bus‚ we were singing from the hotel to the stadium. In the dressing room we watched what was happening on the monitors. And walking on the field just to test we felt the stadium buzzing.

“The nerves kicked in in the tunnel. I felt‚ ‘This thing we’ve been working for‚ it’s now happening’. Especially as the captain with so much responsibility.

“I felt‚ ‘When is the game starting?’ I just wanted to get my first tackle in.

“It took long from the tunnel to line up for the anthems‚ President Jacob Zuma with his speech declaring the World Cup open‚ I had to go to the referee to spin the coin. It just took long.

“But bang‚ to the first whistle‚ and then I felt‚ ‘Now‚ this is the time. I hope we really want this more’.”

Bafana were notably nervy in the first half but survived several scares to go to the break goalless‚ took the game to Mexico in the second half and led through Siphiwe Tshabalala’s stunner in the 55th minute. Rafael Marquez equalised in the 79th‚ and Katlego Mphela struck the post in the 92nd as SA had to settle for a 1-1 draw.

A 3-0 defeat against eventual semifinalists Uruguay in Pretoria and 2-1 win against France in Bloemfontein saw SA exit in the opening round.