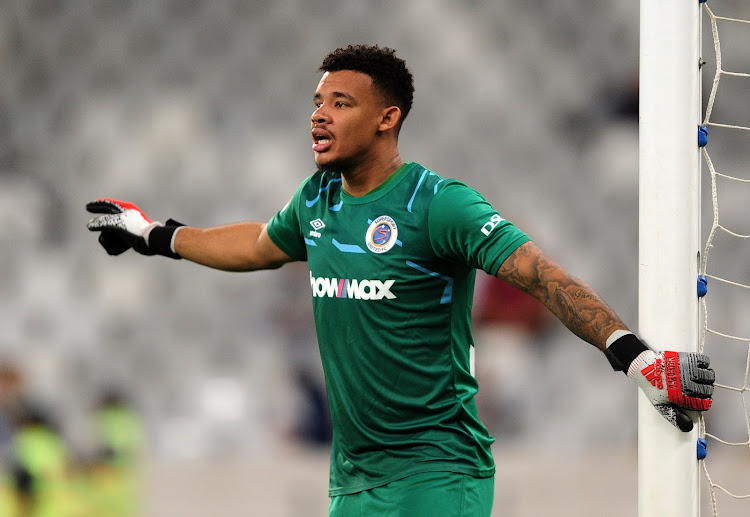 Ronwen Williams has been with SuperSport United since the age of 12.
Image: Ryan Wilkisky/BackpagePix

Ronwen Williams is a “special one”‚ SuperSport United CEO Stan Matthews has said of the Bafana Bafana goalkeeper who will take over from Dean Furman as Matsatsantsa captain in the near future.

With the Premier Soccer League (PSL) season remaining suspended due to the coronavirus pandemic and seeking solutions for a return to play‚ SuperSport officially released Bafana midfielder Furman‚ who will continue his career in the UK next season‚ from the club on Tuesday.

It has been an open secret that 28-year-old goalkeeper and SuperSport youth product Williams will take over the armband‚ thereby ensuring Matsatsantsa replace one strong character as skipper with another.

“Ronwen hasn’t actually officially been appointed as club captain. I think it’s just something we’ve all accepted inside the club – that he’s been groomed for this‚” Matthews said.

“He’s been at our club since he was 12 years old‚ and he knows this club like the back of his hand.

“He grew up in our academy house for eight years. He was schooled by us‚ he’s been trained by us and we are his family.

“He’s a great flagship and role model for the club‚ and he wears the badge on his heart. And I think that’s one of the things that you’re looking for in a captain.

“Obviously he’s a great performer‚ which is another thing you look for. He’s ever-present‚ having played every game last season‚ and that’s another thing.

“He’s PSL Goalkeeper of the Year‚ the Bafana Bafana No.1 at the moment‚ and he’s somebody who is a great leader.

“But we also expect to have 11 leaders‚ and don’t look for one boss on the pitch.

"You could see the danger of that last year where Dean missed 11 games and we only won one of them.

“But for club day to day functions and as a bridge between the players and the technical team and management I couldn’t think of a better person than Ronwen.

“There were other candidates – if Clayton Daniels was a bit younger‚ or Teboho Mokoena a year or two older – so it’s never that anything in life is just given to you.

“But in this case Ronwen is a special one. And now that Dean’s going back to the UK‚ Ronwen will take over that mantle when we return to play.”

SuperSport were in third place‚ on 40 points from 24 games‚ eight behind leaders Kaizer Chiefs (48 from 22) when the Absa Premiership was suspended on March 16.