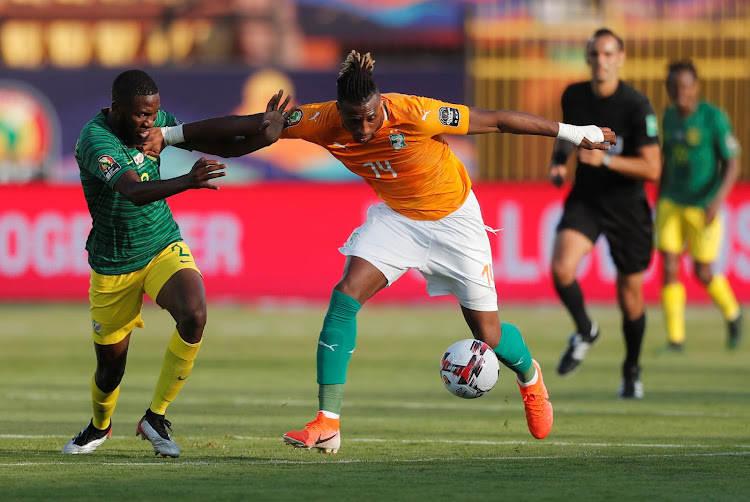 Bafana Bafana were structured and held their own‚ but just too far on the timid side losing 1-0 to the awesome player power of Ivory Coast in their opening 2019 Africa Cup of Nations (Afcon) Group D fixture at Cairo's Al Salam Stadium on Monday.

Aston Villa's beast of a centre-forward Jonathan Kodjia produced a nimble finish for a big man for the big‚ physical‚ and attackingly destructive Ivorians' 65th-minute winner.

Bafana have two games to go.

They can possibly reach the last-16 as one of the four best third-placed finishers if they can manage to put away Group D underdogs Namibia at this venue on Friday night.

But they might need a draw against Morocco‚ too‚ in South Africa's third match at Al Salam Stadium on Monday‚ to be sure.

Bafana appeared to conserve energy as they were largely bossed by Ivory Coast in the first half‚ and happy to go to the break at 0-0. If that was the case‚ SA needed to come out more forceful in the second half.

Bafana were solid‚ but not spectacular.

They could not rattle Ivory Coast‚ as coach Stuart Baxter had hoped they would. Perhaps‚ too‚ it was all a bit over-cautious in the face of the Elephants' physical presence and superior player class.

Baxter surprised by replacing Darren Keet - who had a stunning display in SA's clinching final Nations Cup qualifier against Libya in March - with SuperSport United's Ronwen Williams at goalkeeper.

Otherwise it was a mostly expected starting XI.

Lebohang Maboe‚ who pushed hard to be included by impressing in the three-week preparation camp‚ was a welcome addition in right midfield.

Both teams managed to play at a better tempo and rhythm‚ than Sunday's Group D opener where Morocco sluggishly beat Namibia 1-0.

Algerian referee Mustapha Ghorbal allowing water breaks in a game that kicked of in 37 degrees Celsius played a role in that.

Lille star Nicolas Pepe gave an early glimpse of his ability beating Sifiso Hlanti and Kamohelo Mokotjo down the right and feeding Kodjia‚ who could not connect.

Bafana then had a real chance.

A team coached by Baxter will be strong on set pieces.

Themba Zwane's corner fell to left-back Hlanti‚ who chipped back in and Thulani Hlatshwayo headed a hair wide.

When Ivory Coast won a free-kick on the right‚ and Pepe stood over it‚ it seemed a dangerous situation. The winger curled his delivery onto the crossbar.

In the 32nd Kodjia broke down the middle‚ blasted‚ and Williams pulled off a stunning stop.

The second half began nigglier‚ which suited Bafana as underdogs.

Ivory Coast‚ though‚ bristled with a class that always appeared capable of producing a goal. Winger Max Gradel was played down the left and artistically curled a pass round Thamsanqa Mkhize into the path of Kodjia‚ free of the centrebacks again‚ who this time deftly slipped his finish low past Williams.