Bafana vs Ivory Coast: Who are the Ivorian dangermen in Afcon opener? 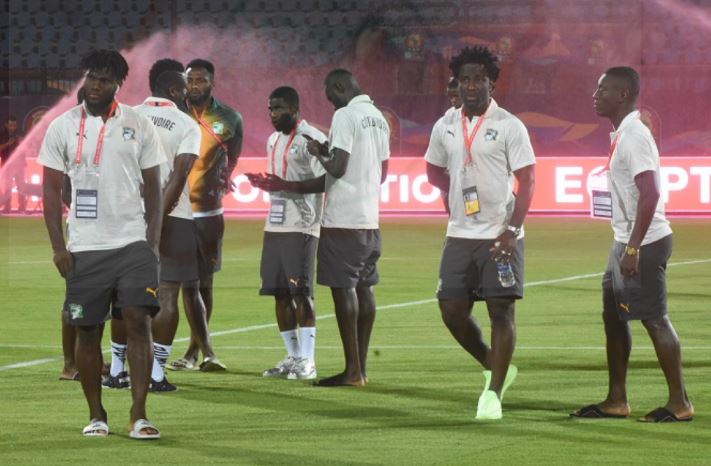 Ivory Coast players do the pitch inspection ahead of their Afcon Group D match against South Africa in the Egyptian capital Cairo on June 24 2018.
Image: FIFCI/Twitter

Bafana Bafana tackle Ivory Coast in their 2019 Africa Cup of Nations (Afcon) opener on Monday‚ facing an opponent with players in the top five leagues of Europe.

There will be many dangermen to look out for in the Ivorian side‚ but TimesLIVE takes a look at five who will need special attention from Stuart Baxter’s Bafana side.

Rampaging wing-back Aurier might not have featured much in the English Premier League last season but remains a key player for the Ivory Coast and is a real danger with his attacking play from the full-back position.

Probably better going forward than he is defensively‚ the former Paris Saint-Germain player provides a steady string of quality balls into the box that Bafana will have to deal with.

He was a big part of the Ivorian side that lifted the Afcon title in 2015.

Born in the Ivory Coast‚ he grew up in France and has not been immune to controversy‚ having been previously found guilty of assaulting a police officer outside a Paris nightclub.

Gradel is the most experienced player in the Ivory Coast squad and a tricky winger who can also play as a striker if needs be.

He has been part of the Ivorian squad for the last eight years after emerging as an unlikely hero at English side Leeds United‚ having also previously played at Leicester City.

Born in Abidjan‚ he grew up in France‚ but joined the famed Lewisham College in 2004 and had flitted between France and England since.

He brings guile‚ skill and football intelligence and will be a test for Bafana’s backline.

Fulham may have been relegated from the Premier League at the end of the last season‚ but one of their stand-out performances was Seri‚ who is now being targeted by a number of English top-flight clubs.

The midfielder is an industrious work-horse‚ adding bite to the centre of the park‚ but also has great technical skills.

Born and raised in Ivory Coast‚ he has played in Portugal and France before signing for Fulham at the start of last season.

He missed out on playing at the 2015 Afcon finals finals.

Zaha has the potential to be an outstanding player at this Afcon among all teams and is coming off an excellent season with Crystal Palace in the English Premier League.

The winger/forward‚ who played two friendlies for England before switching allegiances to the Ivorians‚ has been in and out of The Elephants’ side due to availability‚ but is committed to helping them at the finals in Egypt and will carry a considerable threat as both a scorer and creator of goals.

Pépé was the find of last season for Lyon as he banged in 22 goals in the French Ligue 1‚ second only to Paris St Germain star Kylian Mbappe.

The 24-year-old‚ who can also operate as a winger‚ has been around for some time at Poiters‚ Angers and Orleans in France‚ but after a promising campaign with Lyon in 2017/18‚ burst through as a top star in the country last season.

He made his national team debut in 2016‚ but has only recently become a regular‚ with all four of his international goals coming since last March.