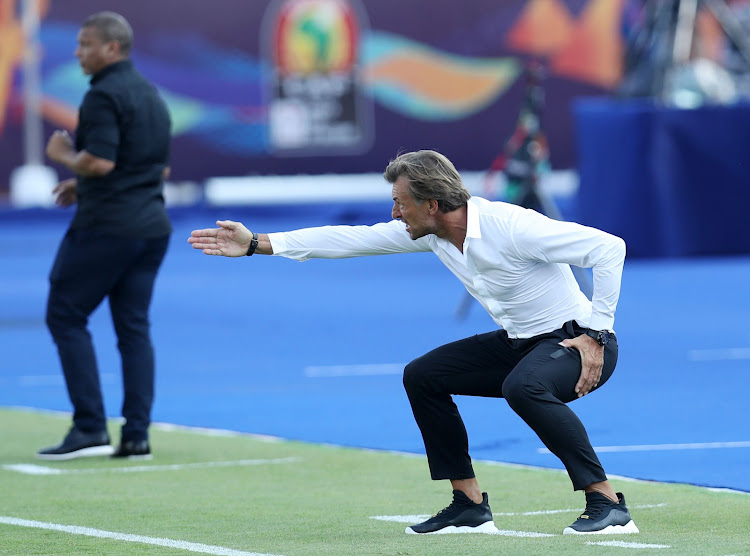 Morocco coach Hervé Renard has slammed the match officials who did not allow the players of both teams to have water breaks in the Atlas Lions' 1-0 Africa Cup of Nations (Afcon) win against Namibia.

Global football union FifPro has raised concerns about the 4.30pm kickoff games at the Afcon finals being played in high 30 degrees Celius heat.

In Saturday's first fixture at that time‚ Uganda's 2-0 Group A win against Democratic Republic of Congo at Cairo International Stadium‚ water breaks were allowed‚ as per Fifa and Confederation of African Football (Caf) rulings.

At times players from both teams appeared to be feigning injuries so that others could drink water.

Renard was not concerned by an unconvincing win from his team‚ especially in such conditions.

He had said before the game that Namibia were tricky opponents‚ and that opening games of major tournaments are always the hardest.

"I think you saw when this competition started with Egypt [winning 1-0] against Zimbabwe‚ it was not easy for the team at home with 75‚000 fans‚" Renard said after his team's win.

"It was difficult for DRC‚ who lost against Uganda.

"It was difficult for Guinea‚ drawing 2-2 against Madagascar. And the last result was Nigeria‚ 1-0 against Burundi‚ only in the last few minutes.

"And today it was the same. I think in the Africa Cup of Nations with 24 teams‚ especially the first game‚ is very difficult.

"I was very surprised - and it's not to complain‚ because we won - but why were the players not allowed to drink in the first and second halves?

"How is it possible? I watched the Congo-Uganda game and it was possible. and today it's not possible.

"If you play football you know you need to drink something. Especially after 20 or 25 minutes.

"So please‚ the organisers‚ they need to think about the players. The players are making the show.

"It's not us in the stands or on the bench. It's the players making the show."

The man-of-the-match‚ Morocco central midfielder M'bark Boussoufa‚ said all the late afternoon kickoff games will be tough for teams.

"I can tell you that it's very‚ very hard to play. It's still in the day.

"There is not much air. And if you make a couple of efforts you can feel that‚ especially by the second half‚ it's very difficult‚" Boussoufa said.

"It would be nice if the referees could give is a break after 30 minutes so that we can drink. I asked the referee but he told me. 'No'.

"But it's very‚ very hard‚ even for professional football players. "