Johan Neeskens insists he enjoyed his previous stay in Mzansi 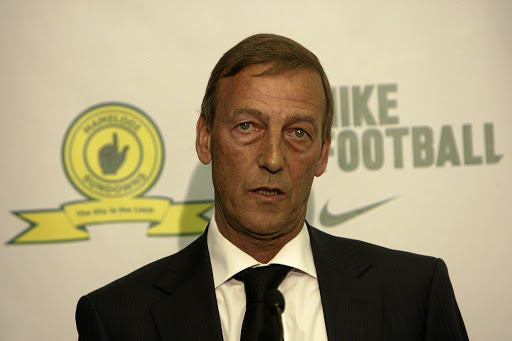 Former Mamelodi Sundowns coach Johan Neeskens is back in SA after leaving the country under a cloud in December 2012, to be replaced by current coach Pitso Mosimane, who has guided the club to four Absa Premiership titles since then.

Neeskens departed Chloorkop on the back of a Telkom Knockout final defeat to Bloemfontein Celtic. He had joined the Brazilians in June 2011.

He was also the man in charge when Sundowns were beaten 2-0 by Tshwane neighbours SuperSport United in the Nedbank Cup decider in May 2012.

Despite his tearful exit - Sundowns boss Patrice Motsepe said at the time that Neeskens was very emotional - he insisted yesterday that he enjoyed his time at Sundowns.

COACHING at Mamelodi Sundowns is much better under Pitso Mosimane than his predecessor Johan Neeskens, says the footballer the fabled Dutch coach ...
Sport
8 years ago

He's in the country at the invitation of gambling company Betway and has been conducting a Safa/KNVB D-Licence coaching course in Randburg with former players such as Edward Motale and Steve Lekoelea, as well as Khabo Zitha, who played for Banyana Banyana.

"Why not? Why do you say I didn't have a good time there? Is it only because of that one moment with the fans?" said Neeskens, who was referring to an incident at Dobsonville Stadium where the fans bayed for his blood following a 2-0 defeat by Moroka Swallows seven years ago.

"I had so many other beautiful moments with them and also with my players. That is part of the job," he said.

In fact, the now 67-year-old is delighted that the team has won another league title and said he's not jealous of Mosimane's success.

"It's great [that they've won the league] . congratulations to the team. It's a fantastic job by everybody within the club and I'm very happy for them," Neeskens added.

JOHAN Neeskens struggled to come down to PSL level when he was coach of Mamelodi Sundowns, says new club captain Alje Schut. Neeskens, the Dutch ...
Sport
8 years ago
Next Article