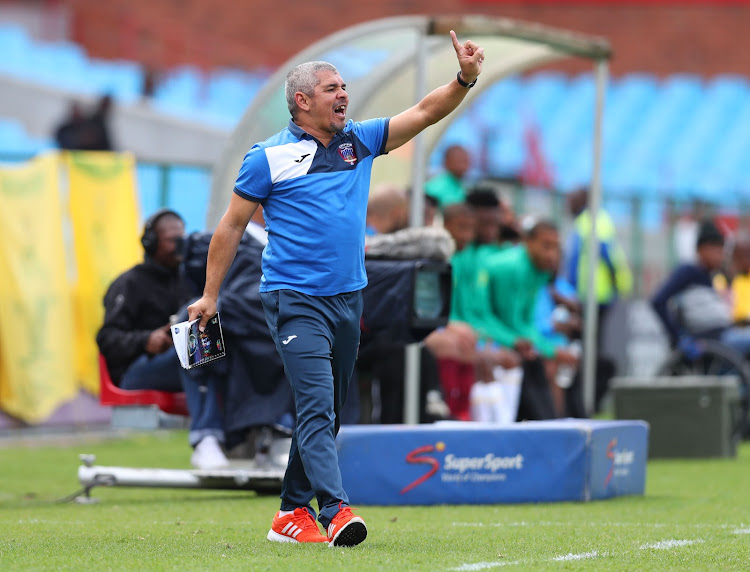 The Chilli Boys enhanced their chances of retaining their top-flight status with an impressive 3-1 away victory at the Old Peter Mokaba Stadium on Saturday.

The win lifted the Port Elizabeth-based team out of the relegation zone playoff spot and into 13th position on the log standings‚ but they are not out of the fire just yet.

However‚ they are now able to control their own destiny as a victory or a even draw against Kaizer Chiefs in Port Elizabeth on Saturday will see them avoid the big drop.

Larsen said his team had won for Mpengesi‚ who he added had been fully behind both players and management.

“The chairman has addressed them [the players]. He's been very positive. He's been motivating them and I must thank him for his support‚” Larsen said.

“He's hardly around‚ he's a businessman so he's hardly in PE. But he does make time from time to time and he's been very supportive from the outside.

“This win is for him‚ he's been under a lot of pressure as well but I think the players knew the importance of the victory here today and they delivered.”

Larsen's troops started at high pace and got off to a quick lead through a 12th minute strike from Rhulani Manzini which beat City goalkeeper George Chigova.

The hosts struck back 15 minutes later as Mohamed Anas found the net.

However‚ Chippa's players cut determined figures and took the lead again shortly before halftime when Zimbabwean Donshano Malamo scored to see his team into a 2-1 lead at the break.

Soon after the resumption‚ Chippa put the result beyond doubt with Tercious Malepe scoring the third.

Larsen said it was rewarding to finally get a positive result after stringing together numerous solid performances without any luck.

“I'm feeling like I felt about all our other performances. I've been tired of hearing from other coaches‚ other players and other people how well we playing and we have nothing to show for it.

“So‚ we backed up a good performance with a victory. That's been disappointing in the last three‚ four five weeks‚ that we have played well and not gotten the results‚” he said.

“I think our defending was very good today. It was effective‚ it wasn't pretty at times.

"But we cleared out lines at the right moment and that was important. In the past we made defensive errors that have been leading to opponents scoring.

“We very happy to come here and score goals‚ it's never easy but the players executed our game plan very well.

"We were very solid through the middle.

“We could have managed it a little better towards the end in the last five minutes. Instead of trying to score another goal we should have taken it to the corner flag.”