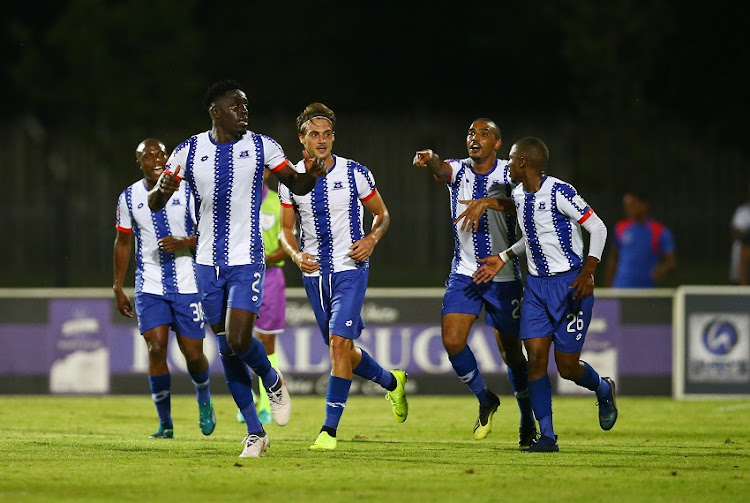 Brian Onyango of Maritzburg Utd after his goal during the Absa Premiership match between Maritzburg United and Black Leopards at Harry Gwala Stadium on December 12, 2018 in Pietermaritzburg, South Africa.
Image: Steve Haag/Gallo Images

Bottom of the log Maritzburg United’s future in the Absa Premiership remains completely uncertain ahead of their must-win clash against SuperSport United at Harry Gwala Stadium on Saturday (kickoff 3pm).

SuperSport travelled to Durban in sixth spot on the table‚ nine points off league leaders Pirates and Sundowns‚ and with just one victory in their last five league outings.

Maritzburg are in a desperate position in last place‚ a point behind second-last Chippa United. They need as many points as possible from their penultimate game against SuperSport‚ then in their final fixture against Baroka FC at Old Peter Mokaba Stadium next Saturday (May 11).

“Pietermaritzburg needs to have a PSL team. The supporters have always been good to us‚ we really appreciate them – they’ve been behind us since the first game of the season‚” centreback Brian Onyango said.

The 24-year-old Kenyan defender is pleading with the club’s supporters to come out in numbers to rally behind the team.

“We can’t afford to let them down so we’re asking them to come in large numbers on Saturday to give us the support they always give us‚” Onyango said.

“We really need them at this time of the season. They are our strength and we plan to give them the three points.”

The Team of Choice can take heart from their most recent outing‚ when they showed great courage to earn a 2-1 win away at Black Leopards in Thohoyandou.

“It’s very important now for us to beat SuperSport. We know how the table stands. We win‚ other teams slip up‚ and we’re on top of them – that's how important this match is‚” Onyango said.

The Pietermaritzburg side have certainly been putting in some good performances of late‚ not always getting the rewards they deserve‚ but with the Leopards win‚ it looks like their fortunes may just have changed.