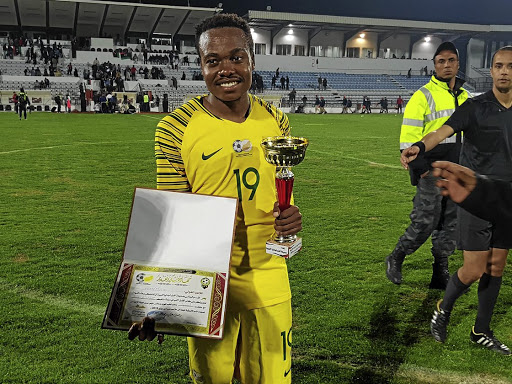 Percy Tau tore the Libyan defence to score two sensational goals that made him the hero on the night. /Supplied

Bafana Bafana deserve a pat on the back for qualifying for the Afcon.

Sowetan picks the standout performers from the group.

With four goals to his name, the "young lion" emerged as one of the top scorers in qualifiers.

He's had to deal with questions that he doesn't deserve to play in the Belgian second division - he's on loan at Saint Gilloise from English Premiership side Brighton, but managed to keep his feet on the ground and contributed with the goals that took the nation to the Afcon, where even a lot more would be expected from him.

Now on 18 appearances in Bafana colours and nine goals, the 24-year-old has shown maturity. He featured in all the matches during the qualifiers.

Leading from the back, the skipper and his defence should be commended for a good job.

Not vocal for someone in a role that demands a constant speaker, but nonetheless what sets him apart is his ability to deliver on a regular basis.

When in conversation with him about Bafana matters, you can sense his desire to do well for the nation and he must be very pleased to have helped Bafana qualify after failing to do so for the 2017 tournament.

It's safe to say he's not really a fan favourite these days, but he's backed up by his work rate.

He worked his socks off in the goalless draw against Libya in Durban last year and was one of the players with the highest ranking.

Furman also held his own in the 2-1 win against the North Africans in Tunisia and also didn't disappoint in the 6-0 thrashing of Seychelles.

So as much as his inclusion is often questioned, it's only fair to judge him on performance.

Bafana Bafana qualification for the Africa Cup of Nations finals was a rare success and it came at the time when some pundits had written them off ...
Opinion
2 years ago

How Bafana Bafana transformed from zeros to nation's pride