Teboho Mokoena not disappointed after exclusion from Bafana Bafana squad 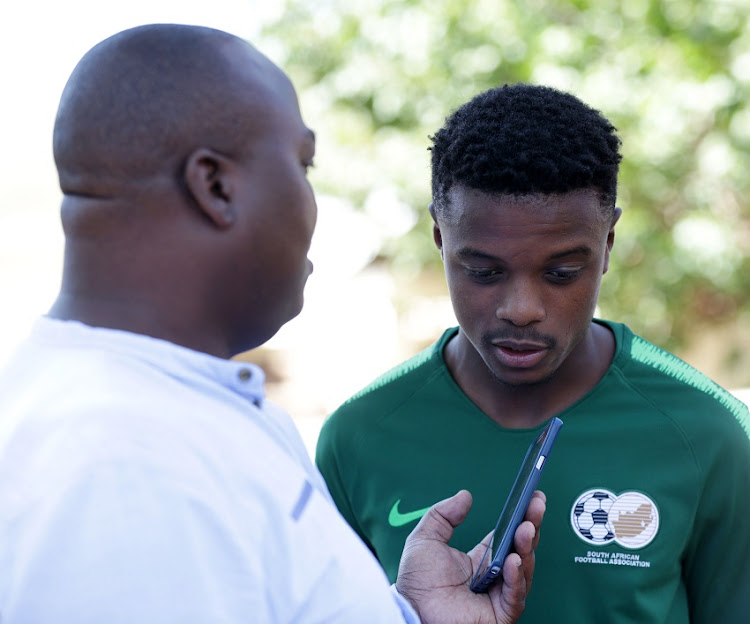 Teboho Mokoena is not disappointed that he wasn’t included in the Bafana Bafana squad that will face Libya in the decision African Nations Cup qualifier in Sfax‚ Tunisia‚ on Sunday.

The SuperSport United midfielder has elected to rather focus his energy on helping the SA Under 23 qualify for next year’s Olympics in Tokyo‚ with the team’s task of qualifying for the global showpiece starting in Luanda against Angola on Friday night.

Mokoena has been part of Bafana’s qualification campaign for Afcon 2019 in Egypt but an agreement between SA Under 23 coach David Notoane and national team coach Stuart Baxter resulted in the utility midfielder being dropped to the junior team for what is equally an important assignment for SA.

“I’m very happy to play for the national teams‚ whether it’s Bafana or the Under 23s‚” said Mokoena.

“It’s the national team and I have to honour the call-up and do what I’m supposed to do.”

Mokoena said as a player he cannot pick and choose which national team to play for and he understood the reasons behind Notoane’s decision to ask Baxter to allow him to drop to the junior national side.

Notoane’s team need a win against Angola in Luanda on Friday (kick-off 5pm SA time) to avoid carrying the pressure of securing victory at all costs in the second leg at the Bidvest Wits Stadium on Tuesday.

After coming off with a slight injury in the league match against Kaizer Chiefs on Friday‚ there were fear that Mokoena would miss the Angola encounter.

But he was declared fit to travel with the team on Tuesday.

“I’m fine and I started training from Tuesday.

"I’m very happy to be part of this team‚” said Mokoena.

“I would also like to thank the coaches for accommodating me.”

Mokoena was chosen as the vice-captain of the team as Notoane preferred fellow midfielder Tercious Malepe of Chippa United as the man to wear the team’s armband.

The soft-spoken Mokoena had earlier told TimesLive that he won’t mind leading the team if Notoane chose him.

“We are all senior players here.

"So we just have to work together as a team and try to achieve what we want‚ which is to first qualify for the Caf eight-nation tournament and then the Olympics‚” said Mokoena of their mission.

Having players like him who have played so many times on the continent is the advantage that cannot be underestimated‚ Mokoena said.

“It’s never easy to play on the continent but it’s very important to win your home games and go away and try to get an away goal‚” he said.

“Most of us here have the experience of playing matches on the continent.

"Gift Links and Phakamani Mahlambi have even played for teams in Egypt.

“We also have players who have played in the Under 17 and Under 20 tournaments in Africa‚ so I think we have enough experience and we know what to expect.”

Notoane finalised his 23-man squad on Tuesday night before the team’s departure for Angola on Wednesday morning.