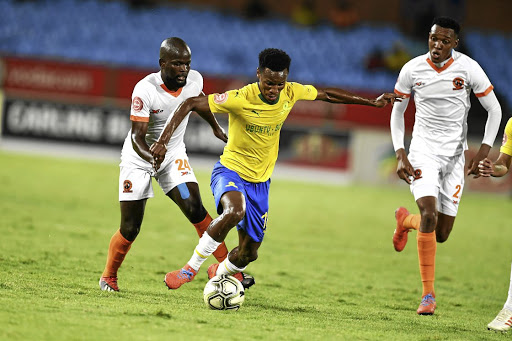 Mamelodi Sundowns missed an opportunity to climb to the summit of the table after an uncharacteristic mistake by Denis Onyango gave away the two points in their 1-1 draw with Polokwane City last night.

Even the best do get it wrong as Africa's best goalkeeper bundled the ball into his own net, enabling City to equalise just before half time.

"I made a mistake. I've been struggling for form since coming back from a knee injury. But I will keep fighting. I know everyone is disappointed but I will bounce back," a contrite Onyango told SuperSport TV afterwards.

With their top-of-the-table clash against Bidvest Wits coming on Saturday, Downs had wanted to go into that match level on 37 points with their title rivals.

Downs finally gave Emiliano Tade his first start since his arrival at the end of the January transfer window.

The Argentinian has fitted seamlessly into the playing style of the team and seems to be the goal-poacher they have been longing for to convert the many chances they create.

Before the opening goal, Tade had some nice interchanges with Gaston Sirino and Lebo Maboe as they piled the pressure on the opposition. Another exchange of passes led to the opening goal from Themba Zwane in the 10th minute, set up by Sirino.

Polokwane tried to penetrate the Brazilians through the middle, between the central defenders, but they were being frustrated by the solid pair of Ricardo Nascimento and Wayne Arendse.

They then concentrated their attack on the flanks where they looked to exploit the defensive shortcomings of left-back Lyle Lakay.

Rise and Shine eventually got the equaliser through some auspicious circumstances as Mpho Mvelase's cross on the left flank found the head of Salulani Phiri. What happened next came as a shock even to the Polokwane players as Onyango mishandled the ball and could only watch as it spun over the goal line in the 45th minute.

With Onyango having rescued his teammates in many games with crucial saves, it was their turn now to try rescue their goalkeeper after the fumble.

The home side turned up the heat in the second half as they went on a mission to reclaim the lead. One after the other: Zwane, Lakay and Hlompho Kekana bombarded the City defence but the towering figure of George Chigova stood firm for City between the posts.