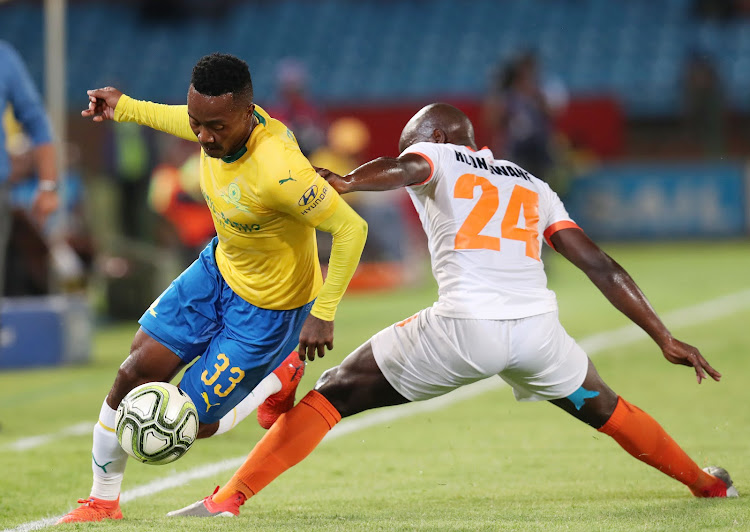 In a forgettable moment, the reigning Caf goalkeeper of the year somehow forgot the basics of goalkeeping when he fumbled a speculative header from City's Zambian striker Salulani Phiri through his legs on the edge of the goal line for the equalizer.

Instead of maintaining composure and grabbing the ball under no pressure, Onyango somehow contrived to fumble it into his own net on the stroke of half time.

It was a mistake that proved to be costly as Sundowns missed out on an opportunity to go level at the top of the log with leaders Bidvest Wits. Disappointment was written all over the keeper's face as he battled to hold tears on his way back to the dressing room at half time.

As a result of the share of the spoils, the Brazilians remain in second spot on the log with 35 points and they trail Wits, who they meet on Saturday away from home, by two points but coach Pitso Mosimane will take comfort from the fact that they have two games in hand.

Mosimane handed Emiliano Tade his first start in the line-up since he joined from AmaZulu recently and played him as a false number nine but could not get the best out of the Argentine attacker as he was positioned too deep.

Tade was part of the Sundowns attacking trio that included Gaston Sirino, Lebohang Maboe and Themba Zwane who were tasked with finding holes in the City defence that was marshaled by Simphiwe Hlongwane and Sibusiso Mbonani.

It did not take too long for the Brazilians to open the scoring through Zwane in the tenth minute. Zwane was set up exquisitely by Sirino on the edge of the box and rifled a low shot past City keeper George Chigova.

After the goal, City upped their attacking tempo with Charlton Mashumba and Walter Musona on the forefront of their attacks but the Sundowns central defence of Wayne Arendse and Ricardo Nascimento had answers to their questions.

The visitors finally got it right on the stroke of half time when Onyango shot himself in the foot while trying to deal with a header from Phiri.

After the break, Sundowns showed urgency to equalize and most of their chances fell for the highly impressive Zwane whose shots were blocked inside the box by disparate City defenders who looked to be happy with a point.

The home ground is getting too big for Glamour Boys' midweek games.
Sport
2 years ago