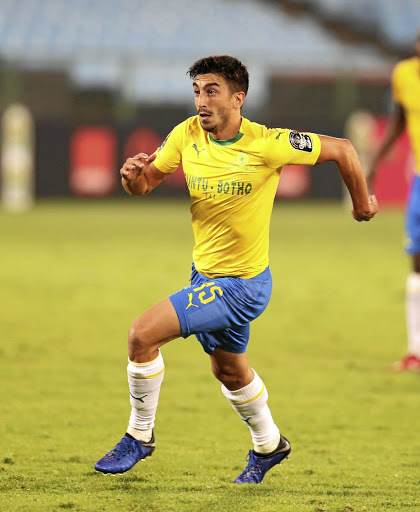 Emiliano Tade could get a first start for Sundowns.
Image: Muzi Ntombela / BackpagePix

Mamelodi Sundowns enter tonight's match against Asec Mimosas with the genuine belief that 12 points should be enough to see them qualify for the knockout phases of the CAF Champions League.

The Brazilians are joint leaders of Group A with Moroccans Wydad Casablanca with six points, after two wins and one defeat.

After their game against Asec at the Stade Félix Houphouet-Boigny in Abidjan (6pm SA time), the South African club will take on Lobi Stars at home and Wydad away.

Downs coach Pitso Mosimane said: "If we can get three points from our away games and win all our home games to get 12 points then you are number one, no doubt about it."

The eight-time Absa Premiership champions showed their superiority over the opposition from the Ivory Coast last week with a comprehensive 3-1 win in Pretoria.

The technical team could be tempted to give Argentinian striker Emiliano Tade his first start after scoring on debut against Asec as Mosa Lebusa and Themba Zwane got the other goals.

Sundowns could make it a clean sweep against the defending Ligue 1 champions of the West African nation, Mosimane added.

"A win in Abidjan is very important, and then we win here at home against Lobi so that when we go to Casablanca we go there stress-free.

"Champions League is awkward. It's more than tactics. There are a lot of things involved, that's why it's the most difficult competition," Mosiman said.

The Tshwane club will have watched with relief this past weekend as their league title rivals Bidvest Wits and Orlando Pirates failed to collect maximum points.

Downs are chasing the double of the Premiership, where they are second with 34 points, and the Champions League.