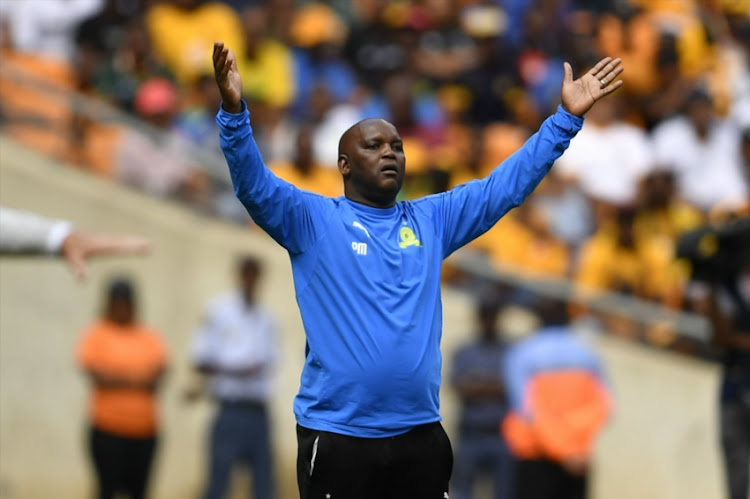 Sundowns stand to lose a point for having fielded an ineligible player‚ Wayne Arendse‚ in their 1-1 Absa Premiership draw against Bidvest Wits at Lucas Moripe Stadium on October 7.

Downs made a last-minute switch‚ adding Arendse even though he was not in the match 18‚ which is in contravention with PSL rules and could see the league’s second-placed team docked a point‚ and two awarded to leaders Wits.

Mosimane also revealed that he was called in to a PSL DC‚ and fined‚ ahead of his team’s 2-0 home league defeat against AmaZulu on January 29.

Speaking after Downs’ 3-0 PSL win against Black Leopards at Loftus Versfeld on Wednesday night‚ Mosimane said: “This game came when we had been under a bit of pressure for the last eight or 10 days.

“You know‚ you lose against AmaZulu. The team is going to have points docked – here we go again.

“Before AmaZulu‚ on the Friday night‚ at 10pm I was still at the league. I had my DC.

“I mean it was a DC about something that happened when Percy Tau was still playing for Sundowns‚ and Eric Tinkler was still coach of SuperSport [last season].

“I don’t know what I said. I’m not saying I should have said that or not. But hey‚ why just before the AmaZulu game?

“And why the story now that we [might be] docked points‚ just before Black Leopards.

“Where has everybody been? I mean‚ are we that busy? I mean‚ what’s happening?

“I spent two years without that thing‚ man‚ going there [to a DC]. I have been a good boy for some time.

“And now I was brought back. I said‚ ‘For what? When did that happen?’

“They said‚ ‘You don’t remember? That day?’ [I said] ‘Which day?’ [They said] ‘That day with Tinkler with SuperSport’.

Mosimane added: “It threw me off against AmaZulu. It worked.”

The coach claimed Sundowns had been advised by the match commissioner against Wits that they could make the switch involving Arendse.

“I’m a layman in terms of the rules. All I know is that we asked the match commissioner‚” Mosimane said.

“Wits had no problem. And then now we are wrong. So I don’t know if the match commissioner knows the rules‚ or if he made a mistake.

“But I’m interested in this because I can guarantee you‚ without knowing my facts‚ that it’s not the first time it happened.

“And also Wits could have protested. They didn’t protest.”

The coach questioned the timing of the DC cases.

“The timing is bad. Now there is this certain period of two weeks‚ or three weeks‚ where they [the DC] are bringing in people. Is it maybe because of the holidays?

“But we have to focus and try and win. Last year we were in the same space with [winning] the league [with Ndorogate]‚ where we never knew who was going to get three points‚ whether Ajax were in trouble. Poor Ajax went to relegation.

“And we never knew – all we knew was you had to have three-plus [points]. And we got three-plus.