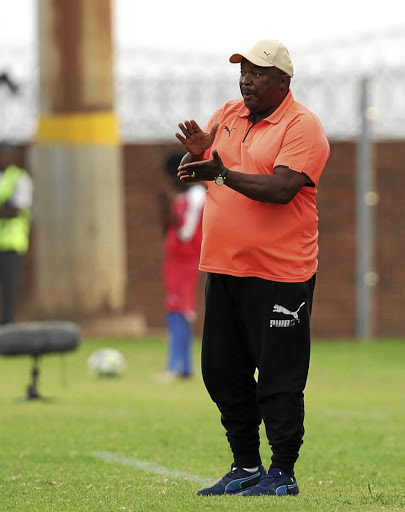 Jomo Cosmos owner-coach Jomo Sono says as long as he is still alive, he will fight until he is promoted to the Premiership.
Image: Muzi Ntombela

What does not kill you makes you stronger.

Jomo Cosmos owner-coach Jomo Sono referred to this old adage as he reflected on their promotion play-offs misfortune.

This after his beloved Ezenkosi and Platinum Stars were beaten to the lucrative Premiership spot by Black Leopards.

It was Cosmos' first heartbreak in this three-team round-robin contest, having previously gained their promotion through this route in 2009, 2011 and 2015.

This time, however, Sono's team finished on five points, three adrift of promoted Lidoda Duvha, which rendered Cosmos' final fixture against Stars at the weekend a dead rubber.

"It was a learning curve for my players," said Sono, after Cosmos won the encounter at Vosloorus Stadium 2-1.

"We have picked up some valuable lessons in this play-offs. I hope that in the new season we will be a better team."

"I did not expect that we would make it [to the play-offs], I was shocked to see us finishing third because at some point we were at the bottom of the log," he added.

Sono also bemoaned his players' lack of experience in their futile mission.

He also feels that, had they won one of the two matches they drew, they would have sealed the deal.

"We had too many inexperienced players, unlike the
previous seasons where we survived the play-offs. If this team can go to the play-offs next season, they will walk over everybody because they have now gained experience in the play-offs," Sono noted.

"I won't give up, I am still alive. You only give up when you are dead. Even if I was a learner at school who had failed matric, I would repeat it until I pass. Why stop while you are still alive? God will fight with you."

Meanwhile, Ajax Cape Town indicated that they were heading back to the South Gauteng High Court next week.

The Urban Warriors said in a statement that they were asking the court to order that they be "reinstated to 15th position and rightfully earn their right to participate in the play-offs".

The Cape club now want the court to have the arbitration decision of Advocate William Mokhare, SC, set aside in a review after he docked the club points, which resulted in the team being relegated.