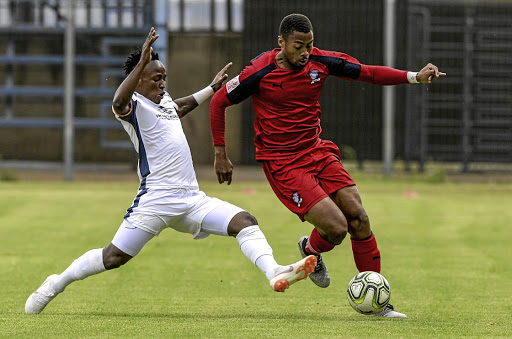 "He [Jomo] always speaks to me about my future because he wants to take me to Europe. It is all up to him to find me a club overseas.

"I hope something comes up soon because he's dedicated to see me grow in football,'' said the 26-year-old Matsilele Jr.

The Johannesburg, midfielder has ruled out playing for any other PSL team. Matsilele Jr. is confident he can inspire Ezenkosi back to the top flight of SA football, despite their unconvincing start to the campaign. Cosmos are seventh on the National First Division (NFD) table.

"I do not see myself playing for any other local team. I am Cosmos through and through. I think I will only leave this club to go to Europe. My focus is to give my best so that we return to the PSL and I am positive we will be playing there next season,'' said the Ezenkosi player.

Bidvest Wits could not batter their way past a fiery Jomo Cosmos by the end of extra time, then succumbed 5-4 in the penalty shootout as Ezenkosi ...
Sport
4 years ago

"Even last season we did not start well but ended up in the play-offs. There's still a long way to go. This is a marathon. Two wins can see us in the top three and that tells you the promotion race is still wide open.''

Ezenkosi booked their berth in the last 32 of the Nedbank Cup after beating Real Kings 2-0 at Vosloorus Stadium at the weekend. Charlton Mashumba and Chibuike Ohizu were on target.

"The Nedbank Cup is a wonderful platform because you get to face PSL teams. Our aim is to give it a full go, hoping it will help us to also do well in the league. I do not think we can fail to handle playing in both competitions because we have depth,'' said Matsilele Jr.