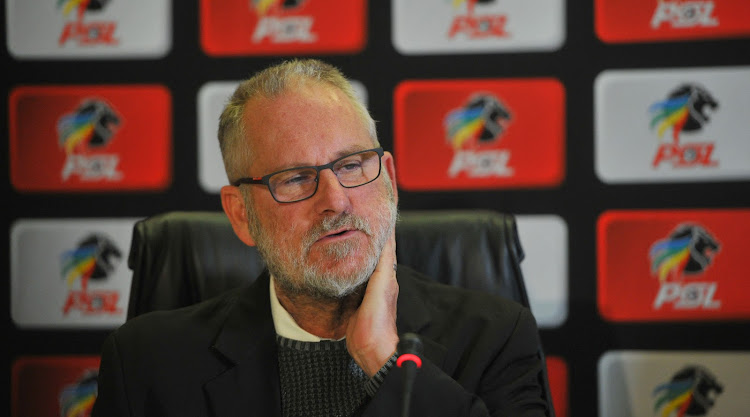 Michael Murphy PSL Head of LEGAL during the PSL Board of Governors on 12 July 2018 at Sandton Convention Centre.
Image: Sydney Mahlangu/BackpagePix

Premier Soccer League (PSL) legal head Michael Murphy has said the decision for Kaizer Chiefs to not play their Telkom Knockout match against SuperSport United in Durban on Saturday behind closed doors is completely in line with a sentence Amakhosi received.

Chiefs have decided to play their TKO quarterfinal against SuperSport at Moses Mabhida Stadium.

This has sparked questions and speculation over bending the rules and favouritism for Amakhosi‚ because the club have a PSL disciplinary committee (DC) sentence saying they have to play two games in KwaZulu-Natal behind closed doors.

Chiefs have already played one Absa Premiership game in front of an empty Moses Mabhida Stadium‚ losing 1-0 against Polokwane City on October 6.

They have a second league game scheduled to be played behind closed doors there on November 10 against Chippa United.

Chiefs moved their TKO game against SuperSport to Durban‚ prompting a storm of questions from the public and media as to why it should not be played behind closed doors instead of the Chippa league game.

Murphy fiercely denied accusations of the PSL bending the rules for Chiefs‚ and said the league was acting on the letter of the law of Amakhosi’s sentencing.

One of those three matches was suspended in the DC ruling.

Murphy said any public or media perception of favouritism was incorrect.

“Despite what people like to portray‚ we’ve got these independent tribunals‚” he said.

“No-one ever says‚ ‘Hey look‚ in the Tendai Ndoro matter [the eligibility case involving Ajax Cape Town last season] the tribunal [the dispute resolution chamber] crucified the league and it shows how independent that is.

“What actually happens is it’s portrayed as if it is some sort of boardroom decision.”

Chiefs will aim to bounce back from their 2-1 PSL Soweto derby defeat against Orlando Pirates at FNB Stadium on Saturday when they meet SuperSport in Durban.