Solinas battles to explain how Kaizer Chiefs can improve 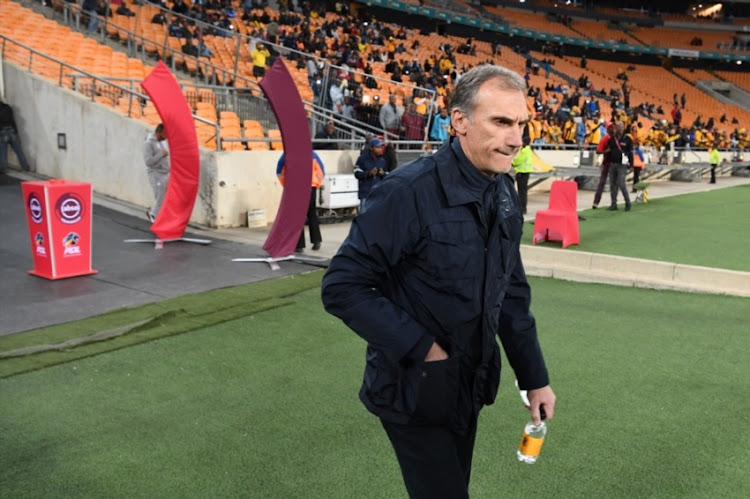 Giovanni Solinas has much work to do turning an ageing Kaizer Chiefs into a competitive force this season.

Concerningly‚ following a 3-1 Absa Premiership home defeat against Bidvest Wits at FNB Stadium on Tuesday night the 50-year-old Italian‚ whose English is at best broken‚ seemed to stumble through his explanation of how that will be achieved.

Solinas has had just three weeks of a preseason to work with his players due to Chiefs’ prolonged search for a head coach‚ and clearly there are many kinks to iron out.

Chiefs began with an encouarging 1-1 draw against champions Mamelodi Sundowns at Loftus Versfeld on Saturday‚ but crumbled somewhat against a forceful Wits.

Amakhosi conceded all their goals in critical phases – one 10 minutes after scoring‚ and two on either side of the break. Two came from their players‚ Bernard Parker and Siphiwe Tshabalala‚ giving the ball away.

Solinas spoke of the areas he saw that needed addressing‚ but lacked detail on how they could be rectified.

“It’s a bad loss‚” the coach said. “Because today we lost the distances between the departments. We did not defend well in the big spaces. We conceded stupid goals.

“We did also create chances. But we did not convert them. Wits created three chances and scored three.

“But now we need a reaction. Because we must learn from this game. It’s a lesson for us.”

“But we play every two or three days. We don’t have the time for training.

“But for the season – the season will be long. We have the time to improve and recover the points that we dropped today.”

One problem facing Solinas is that much of Chiefs’ squad is now chronically ageing.

One marquee signing this off-season of a player admittedly of genuine class in Khama Billiat (27) from Sundowns‚ though one who last season was notably injury-prone‚ does not go far in the form of a replenishment.

Chiefs seem to expect the 27-year-old Zimbabwean to perform as a relative one-man show lifting their fortunes. And Billiat‚ used to being surrounded by stars‚ has looked like he’s trying too hard‚ on Tuesday night finding himself in spaces but with Chiefs’ 30-pluses behind his pace.

Solinas has not wanted to comment on whether Chiefs will make more signings before the transfer window closes at the end of this month.

“No. Me I don’t speak about the signings and the market. I speak about what is in my squad‚” he said.

“Because if I speak about the market now‚ I don’t respect my players. The new signing is ‘Dax’‚ the midfielder from Madagascar. He’s just awaiting his papers.

“I don’t speak about the market because I am happy with my players and I believe in them.”

However‚ failing too many more big signings in the off-season – one Chiefs target‚ Lebohang Maboe‚ has already been poached by Sundowns from Maritzburg United – Solinas might have to to turn to his youth in his squad for much-needed tempo and hunger.