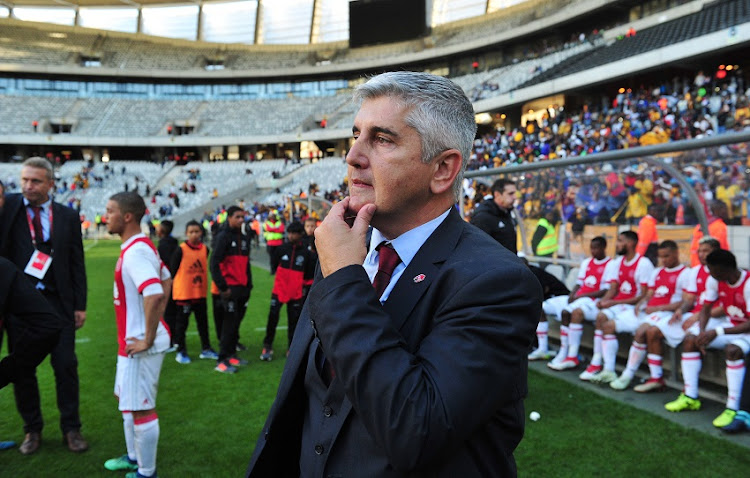 The Cape side decided against pursuing further legal steps to keep their topflight status and will play in the National First Division next season.

Ajax Cape Town boss Ari Efstathiou co-owns the club with the Dutch giants and said his partners from the Netherlands had not been pleased by the ‘Ndorogate’ saga and its outcome.

“They are extremely disappointed‚" he said.

"They are backing the club in the NFD but they are considering their options and that’s understandable.”

Ajax say they ran out of time and immediate legal manouvres to keep fighting against the docking of points after they played Tendai Ndoro in spite of the fact that the Zimbabwe international had already featured for two clubs in a single season.

They were stripped points to finish last in the Absa Premiership and were automatically relegated‚ although they kept up a legal bid to stay up until the process came to a halt last Friday.

“They are extremely disappointed with what has happened and the results of the court cases‚” Efstathiou said.

“I don’t think it reflects very well on South African football that a matter takes five months to come to a situation like this and even worse‚ that the league actually finished before the ruling against us came out.

"It was a process that was delayed and who can (blame) stand them‚ sitting on the outside looking in‚ being perplexed because legal issues in all the other association usually take no longer than a week to settle while we have been at it for five months.”

Efstathiou said their Dutch partners had been aware of all the legal maneuvering over the last five months.

“From the first step that we took‚ we have been discussing it with them so they were very aware of it. I made public statements with regard to that.

"They‚ obviously‚ followed the process and they were completely behind what we agreed to do‚” he added.