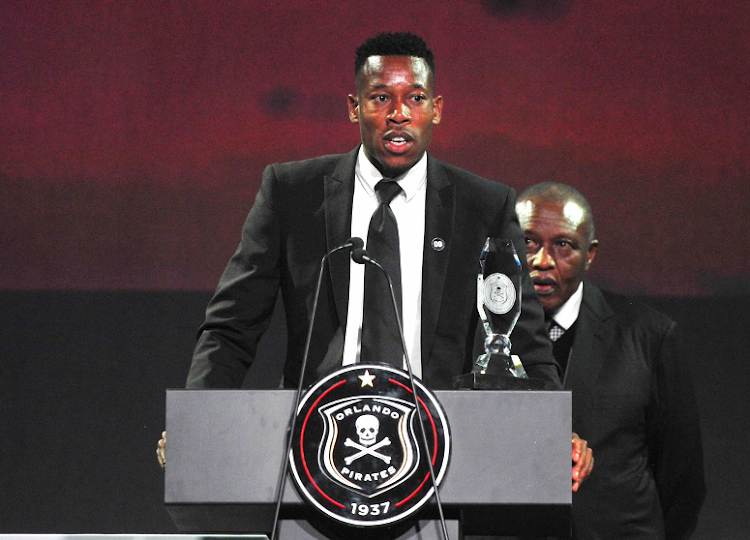 Orlando Pirates' long serving defender Happy Jele gives a speech after he walked away with the Chairman's Award from club owner and chairman Irvin Khoza (behind) during the Buccaneers' Awards gala dinner on Thursday July 19 2018 in Rivonia, north of Johannesburg.
Image: Orlando Pirates FC/Twitter

Happy Jele has been at Orlando Pirates for more than a decade but the defender still arrives at training as if it's his first day at the club.

The Bucs captain remains highly motivated after 12 years at the side and it was hardly a surprise when he was awarded the Chairman’s Award by club boss Irvin Khoza at the Pirates Players' Awards function in Johannesburg last week.

Khoza described Jele as a rare breed in football.

“Jele has served us with dignity and he deserves his accolade (Chairman’s Award)‚" Khoza said.

Jele said he has a lot more to offer and achieve with the only professional football team he’s ever played for since joining them as a 19-year-old right-back from Mhluzi‚ Mpumalanga.

“There are a lot of things that still keep me motivated to go and play football‚" he explained. “But first of all I have to thank God for keeping me at this great football club.

Mamelodi Sundowns need to sign three more players‚ Brazilians coach Pitso Mosimane said‚ even though he had just witnessed a display of his side's ...
Sport
3 years ago

“I now view the lessons that I get every day at training‚ in the changing room and during matches in a different light than I did when I was a kid.

“I would say that maybe in the past years I didn’t see football the way I do now.

"I’m seeing it in a different way and I think that’s the thing that keeps me going.”

The Pirates skipper lists winning the treble - the league title‚ Nedbank Cup and Telkom Knockout - with Dutch coach Ruud Krol in 2011 as the main highlight of his career at the club.

“There are a lot of highs but winning the treble‚ qualifying for the Champions League final in 2013 and the Confederation Cup final in 2015‚ are the main for me‚” said Jele‚ who lists the number of injuries he’s suffered over the years as the low points of his career.

Jele has seen numerous players and coaches go through the Pirates revolving door over the years but he’s especially happy that coach Milutin Sredojevic decided to return to the club last season.

Jele is the only surviving member of the Pirates team that Serbian Sredojevic coached in his first stint‚ leading them in 12 matches between 2006 and 2007.

The defender observed that the coach has come back a lot more wiser.

“They say the more years you gain‚ the more you grow and I have seen the same with coach Micho‚" he said. “I think he’s been growing in football and there are a lot of new things he’s teaching us with coach Rhulani (Mokwena) his assistant.

"They have been doing great things for the team.”

Jele has ruled out the idea of retirement in his immediate future and said it was furthest thing from his mind.

He views the team’s qualification for the next edition of the Champions League and guiding the next generation of players at Pirates as his main challenges.

“I want to play football and win many things and repay the team for keeping for me so long‚” said Jele.

The evergreen defender started out as a right-back but with his pace slowing down over the years‚ he’s been moved to centre-back where he’s played his best football in recent years.

Free State Stars are pondering how to counter the financial burden that comes with participating in CAF.
Sport
3 years ago
Next Article