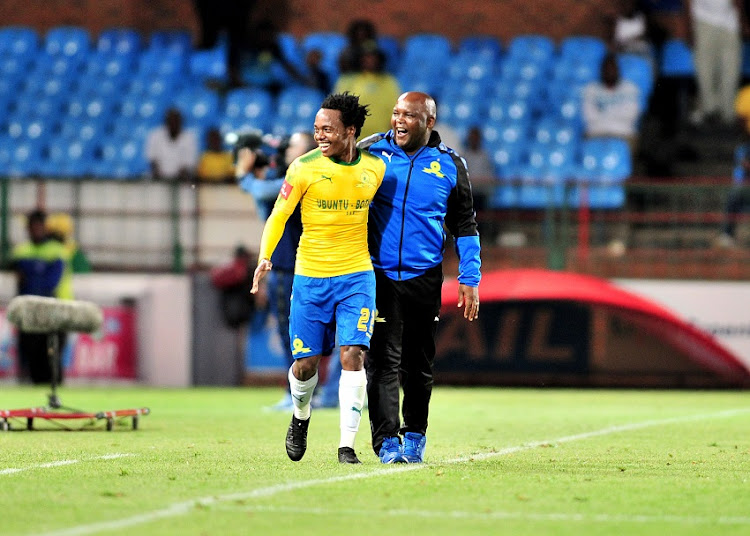 Mamelodi Sundowns coach Pitso Mosimane has given his blessings to his departed star midfielder Percy Tau‚ who has joined English Premier League side Brighton and Hove Albion on a four-year deal.

Tau and Sundowns had a stand-off that led to the delay in the negotiations and the midfielder refusing to report for the Brazilians’ preseason camp in Rustenburg last month‚ but Mosimane said that what is important is the player is smiling now.

“He deserves to be there‚ he earned it and we said he must be in one of the top five league teams in Europe‚” the coach said on Friday as Sundowns prepared to face rivals Kaizer Chiefs in the Shell Helix Cup preseason friendly at FNB Stadium on Saturday.

“We never budged with Russian teams and all those things but he didn’t understand sometimes. He is smiling now and what is important is what happens at the end and now how he starts.

“He can be happy with everybody now that he is going to the Premier League and that’s what we want. We need to see somebody playing in that league because we don’t have anybody at the moment and hopefully he represents us well and others can follow.”

Mosimane said the experience Tau will earn in Europe must benefit Bafana Bafana.

“We wish him all the best and all the success in the world. He is not only representing Sundowns but the rest of South Africa and he must come back here and play for Bafana Bafana‚” the coach said.

After announcing the signing on Friday‚ Brighton confirmed that 2017-18 PSL Player of the Season Tau will be loaned out for the coming campaign.

Mosimane could not be drawn to comment on the fact that the attacker will not play in the Premier League immediately.

“My contribution to him was to make sure that he becomes the player of the year and he gets to Brighton – what happens now is up to him and the people who represent him‚” the coach said.

“There is a positive and negative to it. I will start with the negative‚ which is that a team does not have momentum.

“We have just lost two important players who were playing number nine [striker] and ten [playmaker] and that has destabilised the team. We are yet to say who is going to play in those positions because those guys have been with us for more than five years.

“Our supporters must understand because we have lost influential players and it will take time to replace them.

“The positive is that we are exporting‚ and strengthening Bafana Bafana. We are taking players to the top leagues in Europe and it has not been happening much in SA.”