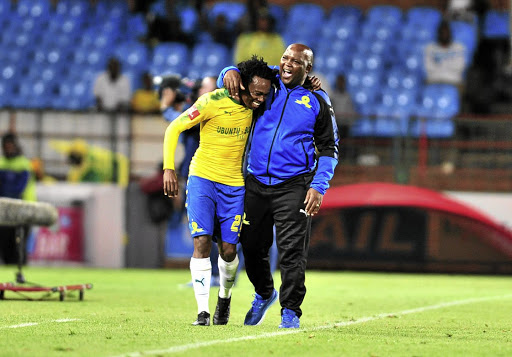 Percy Tau and Pitso Mosimane shared joyous moments but Sundowns must now do without him.
Image: Samuel Shivambu/ BackpagePix

Pitso Mosimane may be wondering how the Mamelodi Sundowns attack would cope without Percy Tau, but he's confident the young forward will live up to expectations if his proposed R50-million move to the English Premiership goes through.

Sundowns begin life without Tau today when they take on AS Togo-Port in the CAF Champions League, with the PSL Player of the Year on the verge of completing a move to Brighton & Hove, subject to a work permit.

Mosimane will have to look elsewhere to see who leads his attack and replace a player who contributed 13 goals and 17 assists overall for the Brazillian in 38 games last season.

Mosimane is adamant Tau will succeed abroad. "Game attitude, playwise, yes, he will make it overseas. He's got good temperament. He can handle the pressure. He's a big player."

But the Sundowns coach added the Bafana star has one aspect of his game which needs massive improvement. "His finishing can be a lot better," he said. "We all know about it. We've spoken about it and once he gets it right, he'll survive in any league."

Mosimane said Tau has his blessings after the star initially seemed to be at loggerheads with the club's hierarchy, staging a protest by not reporting for camp as he tried to force a move.

"He's been good to us. He served us loyally. He's a player from our development structure and for him to break the transfer record fee from an SA team to overseas fills me with joy. I'm happy for him. I wish him well."

Mosimane, meanwhile, will look to Jeremy Brockie to lead his attack this afternoon in Togo, as Sundowns aim to register their first win in Group C and move closer to leaders Wydad Casablanca and Horoya.

"This is a game between two teams who are looking for points to move from the bottom of the table.

"AS Togo know that if they don't beat us they are out of it. It's a tricky match because we play them back-to-back [today and next Friday]."

Sundowns could unleash their new signing Jose Ali Meza today, should his registration papers be ready before kickoff.