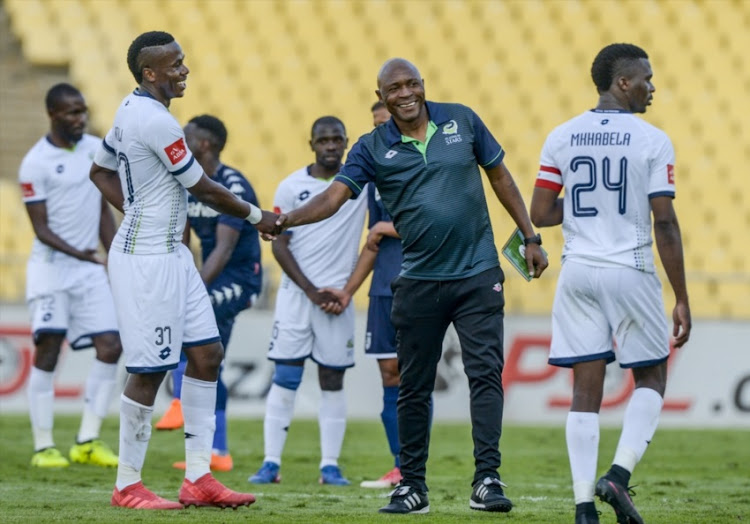 Jubilant Platinum Stars players and staff after the final whistle declared them winners of the match during the Absa Premiership match between Platinum Stars and Bidvest Wits at Royal Bafokeng Stadium on May 12, 2018 in Rustenburg, South Africa.
Image: Sydney Seshibedi/Gallo Images

The dying embers of Platinum Stars Football Club as we know have almost been extinguished with the team’s move from the North West province to Cape Town set to be announced in the coming weeks.

The National First Division club is set to be re-branded as Cape Umoya United‚ SowetanLIVE can reveal.

It will bring an end to professional football in the North West‚ with no team in either top two divisions of South African football playing in the province.

Since a consortium led by coach Roger de Sa purchased the status of Stars earlier this year‚ a move away from the province has always been mooted.

De Sa is known to have preferred Cape Town or Stellenbosch‚ where he will set up a state-of-the-art academy similar to the one he ran with Eric Tinkler at BidVest Wits that produced a steady conveyor-belt of talent.

But with Stellenbosch FC staying put for next season after there had been whispers of a sale‚ the winelands town would struggle to host two professional teams.

It would potentially bring the number of Western Cape clubs in the NFD next season to four along with Ajax Cape Town‚ if their fight to hold on to their top-flight status is unsuccessful‚ Stellenbosch FC and Ubuntu Cape Town.

Second-tier teams from the Mother City have been selling their status in recent seasons‚ with Cape Town All Stars sold to agent Tim Sukazi and relocated to Mpumalanga.

SowetanLIVE was not able to make contact with De Sa despite repeated attempts.