Brave Cosmos give Leopards a scare 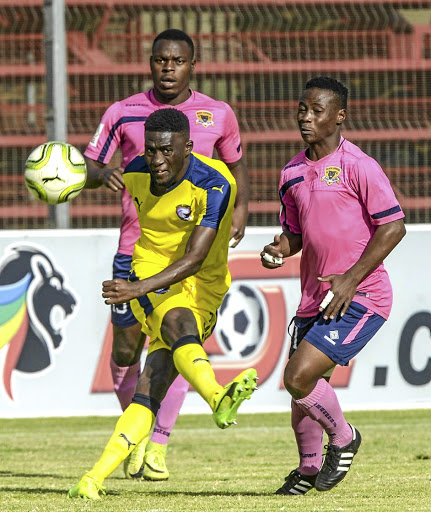 Thato Lingwati's glancing header in stoppage time denied Black Leopards another win in the promotion playoffs, giving his Jomo Cosmos side a valuable point in the 2-2 stalemate yesterday.

The result leaves the race in the three-team round-robin contest wide open.

Judging by yesterday's performance from both clubs, Platinum Stars will have to dig deeper if they are to challenge Leopards and Cosmos for the Premiership slot.

Many teams in the National First Division this season struggled to beat Cosmos at their home venue of Vosloorus Stadium, where they have only lost one match.

Leopards pushed Cosmos to the limit yesterday, though, with Mwape Musonda scoring the opener for the visitors as early as the 12th minute.

For the better part of the first half Leopards dictated terms but a howler by their goalkeeper Rotshidzwa Muleka brought Ezenkosi back into the match.

Leopards continued to dominate the match and were duly rewarded in the 61st minute when Musonda completed his brace. But it was not meant to be for Leopards.

Cosmos threw everything at them and eventually got the equaliser, courtesy of their captain Lingwati, who nodded home the equaliser.

Cosmos will next meet Platinum Stars at Royal Bafokeng Stadium on Wednesday (3pm).

A brace from Orlando Pirates striker Lyle Foster and one from Kaizer Chiefs' Wiseman Meyiwa gave South Africa a 4-1 aggregate win after the first leg ended 1-1.