Kekana and co try to make up ground 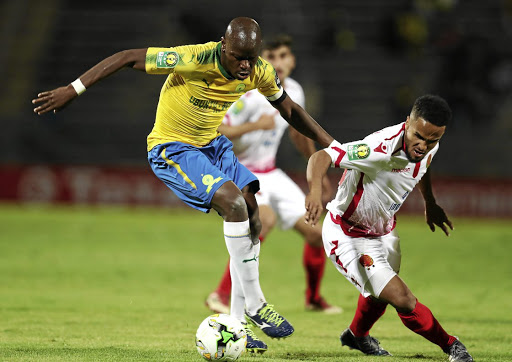 Mamelodi Sundowns will have to get back down to earth from the high of facing Barcelona to get the job done in the CAF Champions League.

The Brazilians will take on Horoya AC at 28 Septembre Stadium in Conakry, Guinea in a Group C clash tomorrow (6pm SA time)

It comes a week after Sundowns played an exhibition match against the Spanish giants at the FNB Stadium.

Despite losing 3-1 to the Catalans, they held their own in the friendly that brought much of the sporting nation to a standstill.

In an unprecedented move, CAF allowed Sundowns a postponement of the Haroya match that was due to be played last week so that Barcelona could come to the country.

Sundowns incurred a R100 000 bill to change the schedule and logistics.

It's now back to business in the competition for the South Africa champions.

They are not where they wanted to be after their draw with Wydad Casablanca in the opener a fortnight ago.

Skipper Hlompho Kekana wants the team to get their first win in the group before the off-season.

"Our mission in this away match is to get the points so that we're not too far behind in the group," Kekana said.

"It will be important that we turn on the switch and put on a great performance after Barca. It still feels unreal that we played them but it's history now.

"As a team we have enough experience to know that this game is a must win after the Wydad draw."

Sundowns are ever more determined to return to the pinnacle of African football after losing out last year. They received a kind draw in their group, which features defending champions Wydad, Horoya and Togo-Port.

Kekana is eager to lift the crown once again after their 2016 triumph.

"It's one of the best feelings you can experience as a footballer and I would love to get it again."