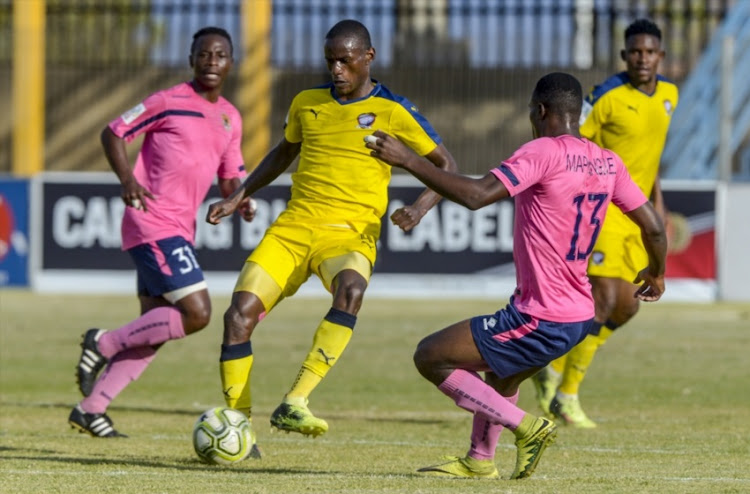 Ananias Gebhardt of Cosmos with possession during the National First Division Promotion and Relegation Playoff match between Jomo Cosmos and Black Leopards at Vosloorus Stadium on May 20, 2018 in Johannesburg, South Africa.
Image: Sydney Seshibedi/Gallo Images

Cosmos twice had to fight back from a goal down as Mwape Musonda's brace threatened to help Black Leopards steal a serious march on Cosmos and Platinum Stars.

Leopards though still top the three-team mini-league with four points while Cosmos could catch them if they beat Platinum Stars away on Wednesday. Leopards though will rue their wasted chances.

While it was Cosmos who asked the early questions of Rotshidzwa Muleka through Lifa Hlongwane's two chances in the first and ninth minutes, Black Leopards landed the first knockdown punch though Musonda in the 12th minute.

Muleka gifted Cosmos an undeserved equaliser five minutes later when he fumbled a relatively tame Ishmael Mgunda header from a Tebogo Makobela corner into his own net.

Once the early fast pace of the game settled, it degenerated into the predictable midfield contest.

The chances that availed themselves in the first 10 minutes dissipated, even though midfielder Denzil Hoaseb had two long range scorchers in the 32nd minute that fizzed past Muleka's net.

With the sun peeping in and out on a cold afternoon, Black Leopards again came out of the blocks early in the second half. Karabo Tshepe and Musonda had reasonably decent chances in the 47th and 49th minutes but Ndlovu proved hard to beat.

Ndlovu was eventually beaten by a long range Musonda chance in the 62nd minute as Cosmos' defence inexplicably stood off and allowed Leopards space to pass intricately.

Tshepe could have added a third two minutes later but lost his composure in the box with the Cosmos defence in sixes and sevens.

Tshepe and Musonda combined superbly for a 79th minute foray but Ndlovu pulled off a good save.

Lingwati wasn't having the best of games in the heart of the Cosmos defence but when it counted, he delivered for his team.