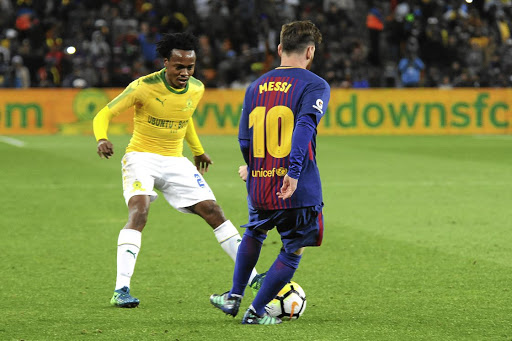 Flashbacks to the 2010 Fifa World Cup were in the air last night as Lionel Messi and his Barcelona came to town once again to say "Ola Amigos".

For an hour-and-a-half last night, the entire country came to a standstill to witness the Catalans take on Mamelodi Sundowns.

The Spanish giants walked away with a 3-1 win courtesy of goals from Ousmane Dembele, Luis Suarez and Andre Gomes.

With the first strike on goal Dembele scored in the third minute, while Suarez doubled the lead in the 18th minute.

It would take a little over half-an-hour for the Catalans' third goal as Gomes scored in the 66th minute.

It was not until the 74th minute that the Argentinian icon, Messi, entered the fray.

Chants of "Messi!, Messi!, Messi!" reverberated around the stadium as fans waited in anticipation to see the little magician.

Sundowns defender Bangaly Soumahoro was clearly star-struck as it was his failure to clear the ball that led to the opening two goals.

At times the encounter felt awkward, like two heavyweight boxers dancing around afraid to hurt each other.

The challenge with a match of this nature is that it creates too much expectation, and when it does not deliver fans do not know how to react.

There were sporadic moments of silence as the sold-out stadium waited to witness something magical.

Midfield maestro Andres Iniesta was his evergreen self at the venue where his winning goal inspired Spain to glory at the 2010 Fifa World Cup.

From what one could gather in the early stages, the Barca players played with some anxiety, not wanting to pick up injuries weeks before the Russia World Cup.

Although the visitors started the game with several non-regular players, their class nonetheless shone through.

What makes the likes of Iniesta and Suarez so marvellous to watch is their ability to control and pass the ball in tight spaces with defenders all over them.