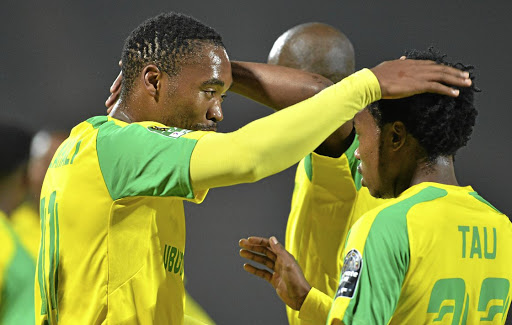 Mamelodi Sundowns midfielder Sibusiso Vilakazi has thrown his weight behind teammate Percy Tau to win the PSL Footballer of the Season award.

Tau is among the favourites to capture the prize at the end of the campaign after superb performances for Sundowns and Bafana Bafana.

Under the guidance of coach Pitso Mosimane, the 23-year-old has transformed himself into one of the most valuable footballers in the country.

Mosimane lashed out last week at pundits who did not back Tau for the award. He has scored 11 goals overall for his club and three goals for Bafana this season.

Vilakazi, who won the crown in 2013/14, believes Tau stands out head and shoulders above the rest.

"For me, he has been the most consistent player in the league and I think it is his time because he has been doing tremendously well," Vilakazi told Sowetan.

"You just have to look at the important goals he has got for us to see how important he has been for us.

"And I like that he is humble and continues to work hard and improve."

Tau will be looked upon to provide more inspiration against Chippa United at Loftus Versfeld tonight (7.30pm).

Vilakazi has also had somewhat of a season of redemption after struggling to adapt in his first season after making the switch from Bidvest Wits.

Now in his second season at Chloorkop, the 28-year-old has found the form that justified the R10-million price tag that they reportedly paid for him.

But Vila, as he is affectionately known, feels he has not yet reached the form that made him the best player in SA.

"I do feel that the two are different. It is difficult to compare myself to that time at Wits. But it has been steady progress for me and I'm not where I want to be. You can never be satisfied."