Sundowns through to Nedbank Cup semis 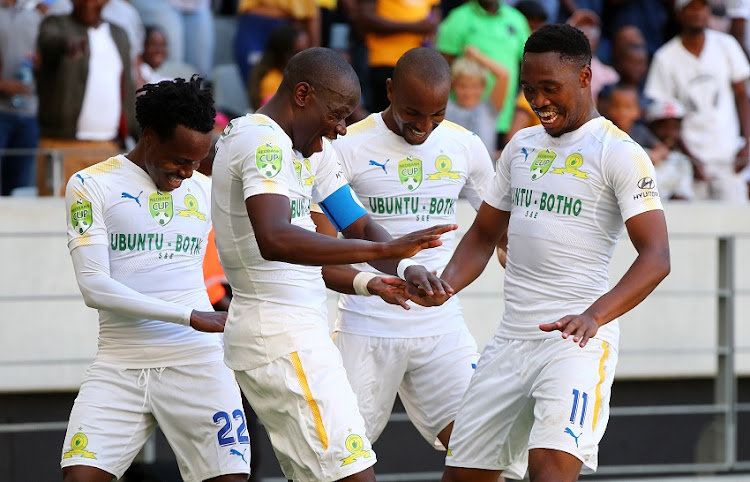 Mamelodi Sundowns hopes of a league and cup double are still alive as they edged hosts Cape Town City 2-1 in their exciting Nedbank Cup quarter-final on Sunday and will face Maritzburg United in the last four.

Percy Tau and a trademark long range effort from Hlompho Kekana in the space of eight minutes in the second half saw Sundowns go into a deserved two-goal lead but Bradley Ralani pulled one back with 20 minutes to go to set an exciting finish.

Sundowns’ superior quality saw them manage to hold on for the remainder of the game to go through and have now been paired away in the post match draw with Maritzburg.

Kaizer Chiefs hosts Free State Stars in the other semifinal on the weekend of April 21 and 22.

Sundowns got their opening goal on the counter attack in the 54th minute after Tiyani Mabunda had stripped City of possession in the midfield with Khama Billiat and Tau surging through to score with characteristic precision.

Kekana fired his shot from some 30 metres out in the 62nd minute to double the lead as City again gave away possession.

It seemed that would be enough to ensure Sundowns’ progress but a slip at the back allowed Ralani to get a shot in on goal‚ and with a fortuitous deflection off Ricardo Nascimento‚ it trickled past Denis Onyango.

“It was very important not to go into extra time. We did well‚ missing our first half chances but we had Bafana players with experience to manage the game well‚” added Sundowns’ coach Pitso Mosimne.

Sundowns hit the woodwork twice in the first half‚ the first from Gaston Sirino in the 27th minute and then Sibusiso Vilakazi 11 minutes later.

The first saw Biliat skin City captain Robyn Johannes as he faked one way and then went the other‚ before squaring the ball for the on-coming Sirino‚ whose effort hit the crossbar and bounced out.

Tau set up the chance for Vilakazi with a ball across the face of goal that the latter glanced with a slight touch onto the far post‚ only for it to roll away to the relief of the home team.

Sundowns did look to be more fluid in their build-ups but City were dangerous too‚ with Ralani on the left and Thamsanqa Mkhize on the right keeping the Sundowns defence busy.

City might well have had an early goal after a sweeping move saw Roland Putsche with a chance in the opening five minutes but his side footed sweep went wide.

A turn and swift shot from Ayanda Patosi was also narrowly wide soon after as City failed to make an early impact.

Tau should have had another second half goal but there was a brilliant clearance off the line from Taariq Filies to deny him.

There was an exchange between coaches Benni McCarthy and Mosimane in the first half‚ or to be fair‚ a monologue from the City mentor that Mosimane chose to ignore.

Two volatile characters in the dugout had an exchange in the media before the game but before the match had an amicable discussion and expected exchanges during the game were limited.