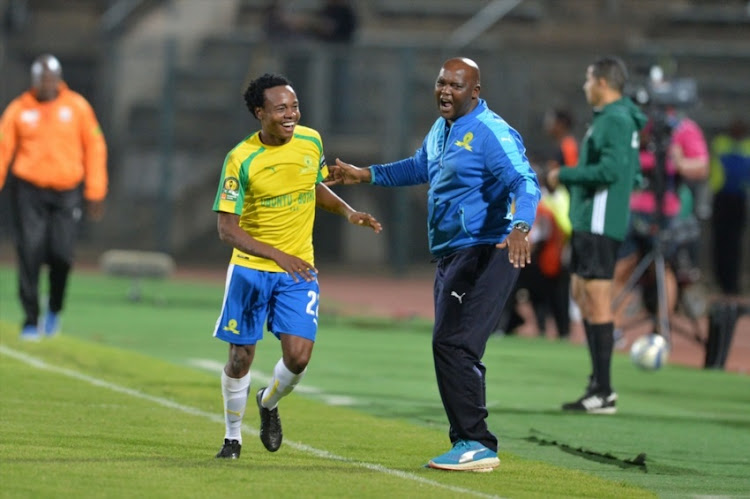 Just give the Premier Soccer League's player of the season award to Percy Tau‚ Mamelodi Sundowns' coach Pitso Mosimane has said‚ playing down any need for further debate on other candidates.

Mosimane also had some things to say on his own chances of winning coach of the season.

The currently top the Absa Premiership‚ despite a gruelling continental programme over the past three years.

"For us Tau is performing. I mean he's got assists‚ he scores‚" Mosimane said of Sundowns' superb forward Tau's season.

"I don't know how you look at it because I was listening to SuperSport 4 two weeks ago. What is this‚ on Monday - Extra Time.

"People were campaigning for who's going to be coach of the year - busy‚ busy‚ busy.

"People were campaigning for who's going to be player of the year. Unbelievable - people have got agendas‚ it's not funny.

"They are the same culprits - they don't change their colours. Anyway.

"For me‚ you can't compare Percy to anybody. Give it to him. He's playing Champions League‚ excuse me - and scoring. He's scoring for Bafana.

"Just give it to Percy‚ please. He's playing for your country man. He's doing it at the highest level‚ week in and week out‚ every three days‚ running‚ playing‚ the same level.

"You can't compare it to well-rested teams. No ways. Get the same stress‚ run the same race.

"You can't study mathematics at lower grade and then you want to compare the person who's studying on higher grade. No. What is that?

"So I can hear those campaigners - big-time campaigners. And some of the people‚ it's unbelievable‚ they are on a panel of selecting.

"And they agree with other people. What did they say? 'Fadlu Davids (Maritzburg United coach) is winning coach of the year'. Already doing it.

"For me‚ how many times have I won it - I think Fadlu should get it. I have Champions League to fight for. Caf‚ fighting with the Florent Ibenges (coach of AS Vita and the Democratic Republic of Congo).

"I mean really. Now I'm fighting with Fadlu Davids to win (in SA). Do I really need that? I don't need that.

"So Fadlu deserves it. Luc (Eymael‚ coach of Free State Stars) deserves it. We know about the campaigns. We are focused on the Champions League.

"We have bigger fish to fry. Some things we don't really focus on."