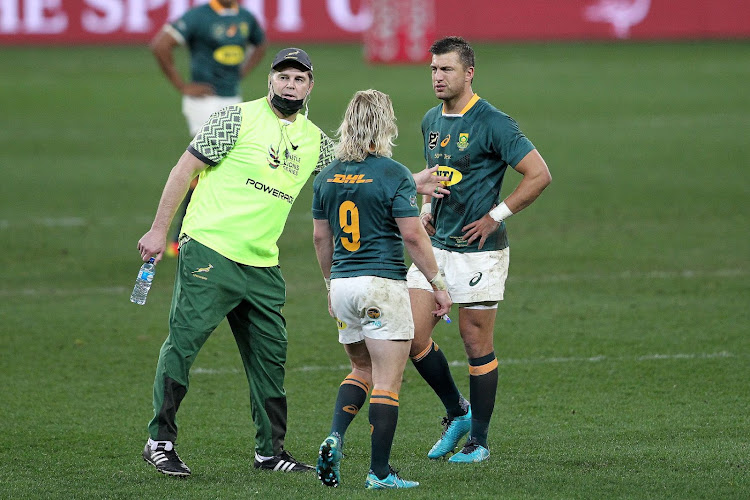 SA Rugby director of rugby Rassie Erasmus will no longer be able to act as a 'water boy'.
Image: EJ LANGNER/GALLO IMAGES

World Rugby has implemented a new trial rule that will prohibits SA Rugby's director of rugby Rassie Erasmus from being a Springbok “water boy” in the future.

Erasmus caused a furore when he ran out as a “water boy” during the 2021 British & Irish Lions tour of SA where he was criticised for coaching the Boks on the field.

In a media statement released by World Rugby on Tuesday, the organisation said its council has approved a global trial limiting the opportunity for non-playing personnel to enter the field of play during a match.

The international mother body further confirmed the rule will be operational for all competitions and stand-alone matches starting after July 1, and said the trial aims to improve the flow of matches by reducing unnecessary stoppages without compromising welfare.

The trial follows an extensive review by the international federation of the current elite rugby environment, including research into player hydration needs, and increasing disruption to play caused by multiple water carriers entering the field of play every time there is a stoppage.

“The new trial for non-medical personnel sets out a revised protocol for when medics and water carriers can access the field of play, limiting the ability to interact with the match officials, and providing a sanctioning framework for any action that either interferes with play or is against the values of the sport,” World Rugby said.

“The aim of the trial is to improve the flow of the game, reduce the opportunity for potential interference, enhance the spectacle for fans and support match management by match officials.

“The trials have been devised in partnership with unions and key stakeholders, in particular International Rugby Players who are supporting the changes.

While World Rugby didn’t mention Erasmus by name, the recent development has been viewed as a step taken against his actions as it states “water carriers cannot be a director of rugby or head coach”.

The adjustments to law 6 published on the World Rugby website are:

Players on the field