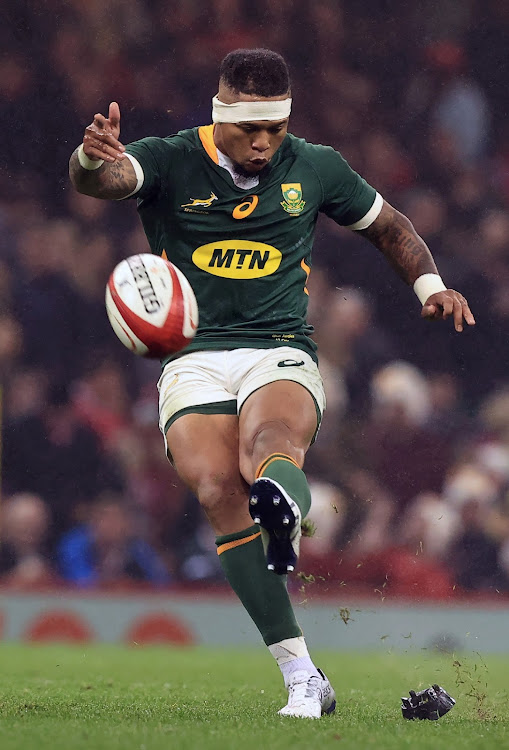 Elton Jantjies kicks the final penalty during SA's win over Wales in Cardiff last Saturday. He is in the starting team to play Scotland.
Image: David Rogers/Getty Images

Franco Mostert and Jesse Kriel will chalk up 50th Test caps when the Springboks take on Scotland in Edinburgh on Saturday.

The versatile Boks will occupy lock and right-wing respectively as the tourists hope to make it two wins from two starts on their end of year tour through the UK.

Kriel, who had a shaky afternoon in the Principality Stadium last weekend against Wales, is retained despite S'bu Nkosi, who missed out last week due to passport issues, having joined the squad.

While it can be argued both players have the physical attributes to deal with the hulking presence of Scotland's SA-born left-wing Duhan van der Merwe, it was Kriel's experience that got him the nod.

At flyhalf Elton Jantjies takes over from Handré Pollard, while Willie le Roux returns to fullback in the place of Damian Willemse, who was concussed in last weekend's clash in Cardiff.

Lood de Jager drops to the bench to accommodate Mostert.

Rotation name of the game

“Franco and Elton are rotational selections. We are trying to build momentum and winning. In doing that we are getting game minutes in certain positions and into certain individuals,” said Springbok coach Jacques Nienaber.

The 27-year-old Kriel made his Test debut against Argentina in 2015, but Mostert, who turns 31 at the end of the month, had to wait a year longer for his first cap, which was against Ireland in 2016.

The team shows two rotational switches and one injury enforced change to the starting side that beat Wales 23-18.

The Bok squad contains 13 of the 23 players who last clashed with Scotland in 2018.

Hero from last week Frans Steyn, who is on the bench, is in line to become the first Springbok whose Test career spans 15 years. Steyn, who incredibly has been on the winning side in 55 of his 72 Tests, will increase his time as an active Springbok to 15 years and two days if he makes it onto the field as a replacement on Saturday.

At 34, he is as committed to the cause as he was when he made his debut almost 15 years ago to the day against Ireland at Lansdowne Road.

“That is the nice thing about Frans. He knows what we are busy with and he's someone you can fall back on,” said Nienaber.

“He is 100% aligned with the Springbok team. He only played 186 minutes in 10 previous Tests this year before last week. He is still unbelievably competitive. He bought into the bigger cause.

“His influence is equally valuable off the field and it is fantastic to have a player of his calibre guide the young players in the squad.”

Nienaber said Scotland have developed into a formidable team under Gregor Townsend.

“They are a physical side with solid set pieces, but they also have the skills to run the ball, so we’ll have to be accurate on attack and defence.

“They conceded the least tries in Six Nations in 2020 and 2021. Scotland have a quality team with a number of experienced players and a few British & Irish Lions players, so we are under no illusions about the challenge ahead,” said Nienaber.