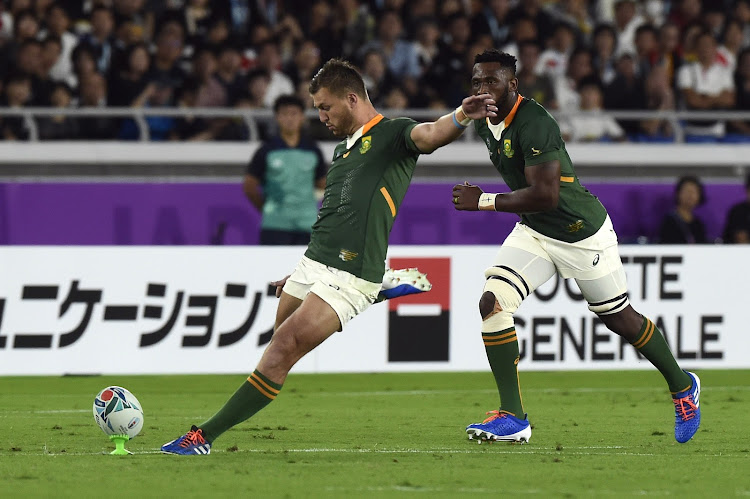 The Springbok brains trust will have their first opportunity to survey South African talent in France when the Top 14 kicks off this weekend.

The last Top 14 season was abandoned due to the Covid-19 outbreak and the start of the new season was delayed for the same reason.

While the Springboks playing in the United Kingdom and Ireland have seen some action‚ it will be the turn of their countrymen in France to do battle from this weekend.

Rugby World Cup-winner Handre Pollard will get the ball rolling when Montpellier play Pau. He will line up next to fellow Bok Jan Serfontein‚ who hasn’t played for the Boks since they lost by a point to the All Blacks at Newlands in 2017‚ in the run-on XV.

Another World Cup-winner‚ Cobus Reinach‚ will start off the bench after joining the team from Northampton Saints‚ while 2007 RWC-winner Bismarck du Plessis will do the same.

Springbok John Goosen is not in the match-day squad.

Pau’s only Springbok is prop Lourens Adriaanse who has been included on the bench. Adriaanse played six Tests for the Boks between 2013 and 2016.

Former Stormers and Bulls centre Johann Sadie proved a key member of Agen’s team before the last Top 14 season came to an abrupt halt. His last seven matches were all 80-minute affairs and he is likely to line up when they kick off their new campaign again Castres.

Combative former Sharks utility forward Etienne Oosthuizen is likely to be unleashed by Lyon when they play Racing 92‚ while Brive‚ who play Bayonne‚ have ex-Cheetahs centre Nico Lee in their ranks.

In the final match-up of the round Cheslin Kolbe and Rynhardt Elstadt are likely to feature for Toulouse‚ who face the daunting prospect of playing away at Clermont. The last time the teams met Toulouse won convincingly 34-8 but playing Clermont away remains a tall order.

World Cup star Kolbe’s versatility has proved valuable for Toulouse who have played him at fullback‚ left wing‚ right wing and flyhalf over the last year.

With the heavy-hitting Elstadt‚ who narrowly missed out on World Cup selection‚ they know they have an impactful contributor while carrying and in defence.

Dillyn Leyds‚ who played the last of his 10 Tests against Argentina last year‚ could make his La Rochelle debut when they take on Toulon. Leyds joins former Stormers teammate Raymond Rhule in Nouvelle-Aquitaine on France’s southwest coast and his introduction to the Top14 should provide a proper challenge.

Eben Etzebeth has played eight matches since joining Toulon‚ a team desperate to recapture the magic that has slipped from their grasp in recent times.

Elsewhere‚ however‚ the tentacles of the pandemic have put a stranglehold on Parisian glamour club Stade Francais. Their opening-day fixture on Friday has been postponed because they don’t have enough fit and able front-rankers. Late last month 25 playing staff and personnel had tested positive for the virus.