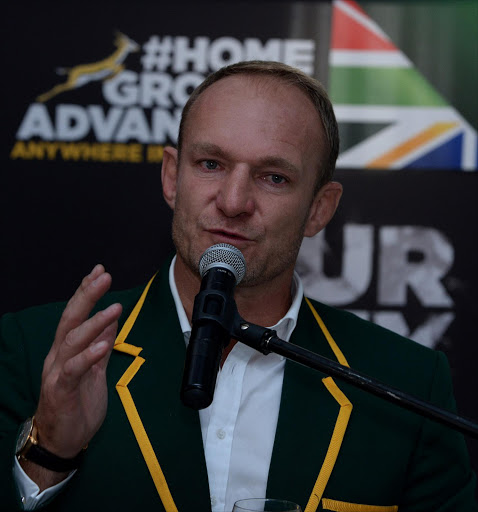 Rugby World Cup winner and Advent Sports Entertainment and Media (ASEM) chief executive officer Francois Pienaar has dismissed suggestions that Proteas team director Mark Boucher is a shareholder of the 3TeamCricket tournament that was to take place at SuperSport Park on Saturday.

Pienaar‚ whose ASEM oversees the Varsity Cup and the various sporting codes that fall under Varsity Sports‚ is the CEO of the 3TC tournament.

An email that has been circulated and SowetanLIVE has seen claims that Boucher is a shareholder/founder.

“I can categorically confirm that Mark Boucher is not a shareholder. This is a spurious and defamatory allegation‚” Pienaar said.

The tournament was scheduled to take place on Saturday‚ but has been postponed as it hasn’t received the necessary government approval.

"The moment you misrepresent the truth‚ its fraud and there’s a document that indicates that Mark is a shareholder and that’s been send to the media.

"The dolus (intent) is to do harm‚ so there’s a bit of crimen injuria‚ but fraud is the one because all we need to prove is that someone drafted the document isn’t true.

Faul clarified as to when CSA employees find themselves in conflict of interest matters.

“Where the conflict may come in from a future perspective is where it develops and 3TC rolls out as this world event or more. Only then they’ll have to declare if they getting any money from it or they’re a shareholder.

South African Cricketer’s Association CEO Andrew Breetzke said in an email that they weren’t aware of the document that has been widely circulated.

“Saca is not aware of the document circulating on social media (this is the first I am hearing of it)‚ and has no knowledge as to the status of Mark Boucher relative to 3TC‚” Breetzke said.